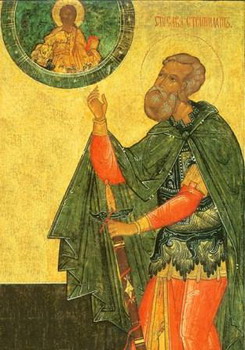 Saint Sabbas Stratelates came from a Gothic tribe. For his bravery he attained the high rank of military commander or "stratelates," and he served under the Roman emperor Aurelian (270-275).

From his youth, Sabbas was a Christian and he fervently followed the commands of Christ. He helped the needy, and visited Christians in prison. Because of his pure and virtuous life the saint received from the Lord the gift of wonderworking, healing the sick and casting out demons in the name of Christ.

When the emperor learned that St Sabbas was a Christian, he demanded that he apostasize. The martyr threw down his military belt and declared that he would not forsake his faith. They beat him, burned him with torches, and threw him into a cauldron with tar, but the martyr remained unharmed.

Looking on at his torments, seventy soldiers came to believe in Christ. They were beheaded by the sword. St Sabbas was thrown in prison. At midnight, while he was praying, Christ appeared to the martyr and shone on him the light of His Glory. The Savior bade him not to fear, but to stand firm. Encouraged, the Martyr Sabbas underwent new torture in the morning, and was drowned in a river in 272.

You abandoned earthly rank and honor,
and as an athlete, confessed Christ God before the false and tyrannical emperors.
For His sake, you endured much suffering, O glorious one.
Therefore, splendidly adorned with the armies of heaven,
you have been crowned with a beautiful wreath of victory
by the King who reigns over all.
As you stand before Him, O Sabbas,
pray that He may save our souls.

You were shown to be an invincible athlete, most blessed Sabbas,
overcoming the snares of the barbarians.
You contended with faithfulness,
conquering a multitude of the invisible enemy.
Therefore, you have woven a wreath of victory.
Most glorious one, entreat Christ for those who honor you with faith. 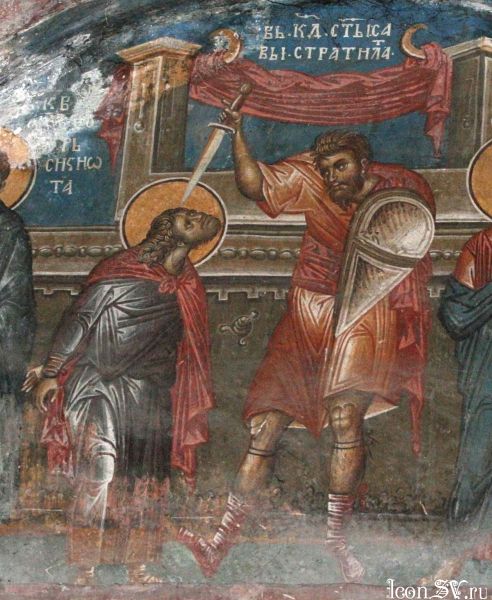