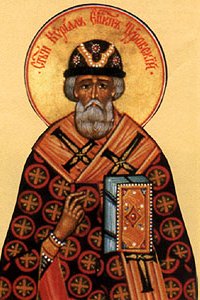 Sainted Kirill (Cyril), Bishop of Turov, was born of rich parents in the 30's of the XII Century in the city of Turov at the River Pripyat.
From his early years Saint Kirill eagerly read the sacred books and attained to profound understanding of them. He studied not only in Russian, but also in Greek. At the age of maturity Saint Kirill refused his inheritance and took vows in the Turov Borisoglebsk monastery. He asceticised much in fasting and prayer and drilled the monks for full obedience to the hegumen: a monk, who is not found in obedience to the hegumen would not fulfill his vow and therefore is not able to be saved.
There are preserved three compositions of Saint Kirill about monastic life, one of which – "The Narrative about the Black-Robed Order from the Old Law and from the New" – might be imputed to a period of his being in the monastery.
After a certain while Saint Kirill withdrew into seclusion upon a pillar, where he intensified his asceticism still more and "to interpret much the Holy Scripture". Many turned to him for counsel in the spiritual life.
The holiness of life and profound enlightenment of Saint Kirill brought widespread attention upon him, and they chose him for the Turov cathedra. In the year 1169 Saint Kirill took part in a Council, censuring Bishop Theodore (Feodor), who occupied the Vladimir-Suzdal' cathedra and who sought to separate from the Kiev metropolitanate. Saint Kirill denounced the heresy of Theodore and composed many letters to holy prince Andrei Bogoliubsky (Comm. 4 July), in which he instructed him and provided him guidance into the cause of church disorders in the Rostov' region.
Out of his love for solitude, Saint Kirill left the cathedra (by the year 1182, under which there is already mentioned the Turov bishop Lavrentii) and he devoted himself fully to the writing of spiritual compositions. He composed, indeed, a discourse on all the yearly cycle of the Lord's feasts, but not all of them have been preserved. The works of Saint Kirill merit a place in book-collections alongside the works of the holy patristic fathers.
The most complete collection of works by Sainted Kirill (Cyril) of Turov, published by the Turov bishop Evgenii in 1880, includes: 1) Sermon on Palm Sunday, from Gospel accounts; 2) Sermon on Holy Pascha on the Radiant Day of the Resurrection of Christ, from the prophetic accounts; 3) Sermon on the new Sunday after Pascha, about the Renewal of the Resurrection, about the Artos [loaf blessed on Pascha], and about Thomas touching the Side of the Lord; 4) Sermon about the Taking-down the Body of Christ and about the Myrh-bearing Women, from the Gospel account, and praise of Joseph on the 3rd Sunday after Pascha; 5) Sermon about the Paralytic from Genesis and from the Gospel account, on the 4th Sunday after Pascha; 6) Sermon about the Blind-man and the enmity of the Jews from the Gospel account, on the 4th Sunday after Pascha; 7) Sermon about the Ascension of the Lord, on Thursday of the 6th Week after Pascha, from prophetic decrees, and about the Resuscitation of the Race of Adam from Hades; 8) Sermon on the Holy 318 Fathers, from the Holy Books, decreeing about Christ the Son of God, and Praise to the Fathers of the Holy Nicea Council (Sobor), on the Sunday before Pentecost; 9) Parable about the Blind and the Lame; 10) Parable about the Human Soul, and about the Body, and the Breaking of God's Commandments, and about the Resurrection of the Body of Man, and about the Future Judgement, and about the Torment; 11) Narrative about the Black-Robed Order, from the Old Testament and from the New, bearing a form in common, and about the accomplishing of this matter; 12) Account to Hegumen Vasilii: a Parable about White-Robed Men, and about Monasticism, and about the Soul, and about Repentance; 13) Letter of a certain Starets (Elder) to the Blest-of-God Archimandrite Vasilii about the Schema; 14) Four Prayers on Sunday (after Matins, Hours, and 2 after Vespers); 15) Four Prayers on Monday; 16) Four Prayers on Tuesday; 17) Five Prayers on Wednesday (after Matins, Hours, and 3 after Vespers); 18) Three Prayers on Thursday (after Matins, Hours, Vespers); 19) Four Prayers on Friday (after Matins, Hours, and 2 after Vespers); 20) Six Prayers on Saturday (2 after Matins, 1 after Hours, and 3 after Vespers); 21) Molieben Canon; 22) Confession and Remembrance. Later on was discovered the "Sermon on the Enlightenment of our Lord Jesus Christ". It is known, that the saint composed also a "Great Canon of Repentance to the Lord in alphabetic Chapters". As a theologian Saint Kirill saw his task in this, to discern the true and hidden thought of this or that text of Holy Scripture.
Sainted Kirill died on 28 April in about the year 1183. From his contemporaries he received the title of being a Russian "Zlatoust'" (Chrysostomos). About himself the saint humbly wrote: "I am not an harvester, but I gather up sheaves of grain; I am not an artist in book matters", – always however, conscious of the sublime hierarchical service in which the Lord established him: "If I were to speak of myself, ye would have done well not to have come into the church. But I proclaim to you the Word of God, I read to you the account of Christ... I do distribute forth the words of God, finer than gold or other stones, more sweet, than mead or honeycomb, and ye would be deprived of them, not having come to church,... but ye, having come, I do praise and bless". 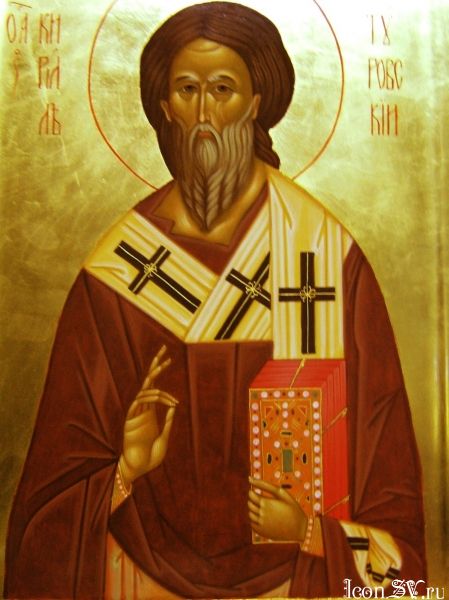