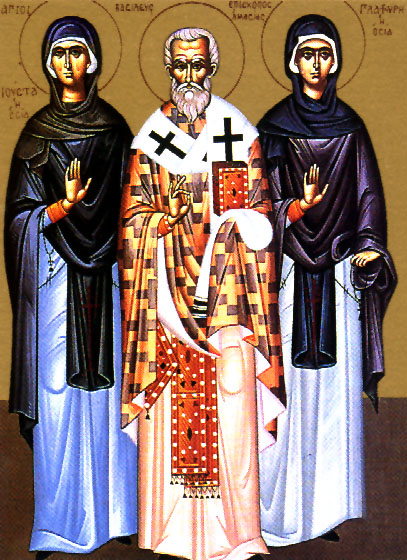 The Virgin Glaphyra. Licinius burned with passion for Glaphyra, a maidservant of his wife Constantia.The holy virgin reported this to the empress and sought her help. Dressing her in men’s attire and providing her with money, the empress Constantia sent her to Pontus in the company of a devoted servant. They told the emperor that Glaphyra had gone mad and lay near death. On her way to Armenia, St Glaphyra stopped in Amasea, where the local bishop, St Basil, gave her shelter.

At this time the saint was building a church in the city. St Glaphyra donated all the money that she had received from Constantia for its construction, and in a letter to the empress she asked her to send additional funds to complete the church. The empress fulfilled her request. However, St Glaphyra’s letter fell into the hands of the emperor. The enraged Licinius ordered the governor of Amasea to send him the hierarch and the maidservant. St Glaphyra died before the edict arrived in Amasea, and St Basil was sent to the emperor. Two deacons, Parthenius and Theotimos, followed after him and lodged near the prison where the saint was held.

The pious Christian Elpidephoros bribed the jailer and each night he visited the saint with Parthenius and Theotimos. On the eve of the saint’s trial, he sang Psalms and chanted, “if I should sojourn at the extremity of the sea... even there Thy hand would guide me, and Thy right hand would hold me” (Ps 138/139:9-10). These were prophetic words.

Three times he broke down in tears. The deacons were afraid that the saint would not be able to endure the coming torments, but he calmed them.

At the trial St Basil resolutely refused the emperor’s offer to become a pagan priest, and so he was sentenced to death. Elpidephoros gave the soldiers money, and they allowed the saint to pray and to speak with his friends before execution. Then the saint said to the executioner, “Friend, do as you have been ordered.” Calmly, he bent his neck beneath the sword.

When the martyr had been beheaded, Elpidephoros tried to ransom his relics from the soldiers. But the soldiers were afraid of the emperor and they threw the saint’s body and head into the sea. After this, an angel of God appeared to Elpidephoros three times in a dream, saying, “Bishop Basil is in Sinope and awaits you.”

Heeding this call, Elpidephoros and the deacons sailed to Sinope, and there they hired fishermen to lower their nets. When they lowered the net on the suggestion of the deacons Theotimos and Parthenius, they came up with nothing. Then Elpidephoros declared that he would ask them to lower the net in the name of the God Whom he worshiped. This time, the net brought up the body of St Basil. The saint’s head was attached to his body once more, and only the gash on his neck indicated the blow of the sword. The relics of St Basil were taken to Amasea and buried in the church he built.