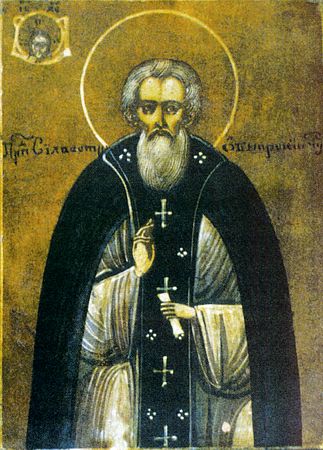 The Monk Sylvester (Syl'vestr) of Obnorsk was a disciple and novice under the Monk Sergei of Radonezh (+ 1392, Comm. 25 September and 5 July). After completing obedience at the Trinity monastery, the Monk Sylvester received blessing for wilderness-dwelling.
In the deep forest at the River Obnora, flowing into the River Kostroma, he set up at his chosen spot a cross and began to asceticise. For a long time no one knew about the holy hermit. His cell was by chance discovered by a peasant who had lost his way. He told the distraught hermit, how he had come to this place, over which earlier he had seen luminous rays, and then pillars of cloud. The monk shed tears of sorrow, that the place of his solitude had been found out. The pilgrim besought the saint to tell about himself.
The Monk Sylvester said, that he was already living here no short while, and that he ate tree bark and roots. At first he became weak without bread and fell on the ground from his weakness. But then an Angel appeared to him in the guise of a wondrous man and touched his hand. From that moment the Monk Sylvester did not experience any distress. And then the peasant another time, this time deliberately, came back to the monk and brought him bread and flour for reserve supply.
This one meeting was sufficient for the exploits of the hermit to become known to many. Soon peasants began to come to him from the surrounding though not close settlements. The Monk Sylvester did not refuse them to build cells alongside him.
When the brethren had gathered, the monk himself set off to Moscow and petitioned of Sainted Alexei (1354-1378, Comm. 12 February) blessing for the construction of a temple in honour of the Resurrection (Voskresenie) of Christ. The sainted-hierarch entrusted to him an antimins ["antimension" or 'corporal" for the altar‑table, needful for celebrating of Divine Liturgy], and made him hegumen of the monastery. With the construction of the church the number of brethren quickly grew, and the monk frequently withdrew for prayer into the dense forest. This spot received the name "Commanded-Grove", since the Monk Sylvester commanded that no trees should be cut there. In the thick of this grove the monk himself dug out three wells, and a fourth – on the side of an hill at the River Obnora. When the monk returned from his solitude, there usually awaited him around the monastery a number of people, and each wanted to receive his blessing and hear his advice.
When the saint fell into a fatal illness, the brethren, who were distressed about his going off into solitude, were even more distressed about the impending end of the saint. "Grieve not over this, my beloved brethren, – the monk said to them in solace, – for in everything is the will of God. Keep the commandments of the Lord and fear not in this life to suffer misfortune, so as to receive reward in Heaven. If indeed I have boldness before the Lord and my deed be pleasing to Him, then this holy place will not diminish with my departure. But pray the Lord God and His All-Pure Mother, that ye be delivered from temptation of evil". The monk died on 25 April 1479 and was buried towards the right side of the wooden Resurrection church.
There has been preserved from the year 1645 a record of miracles of the monk, in which 23 miracles are described. In quite a number the monk healed from demonic‑possession (12 cases) and delirium, and from eye-afflictions (6 cases). A lesson‑teaching miracle occurred in 1645. The priestmonk Job of the monastery directed peasants to cut down the interdicted forest-grove for firewood, and for this he was struck blind. After four weeks he acknowledged his sin, repented and gave a vow not to act on his own will, but to do everything on the advice of the brethren. The priestmonk finished out the molieben in church, after which he was brought up to the reliquary of the Monk Sylvester, and there he regained his sight.