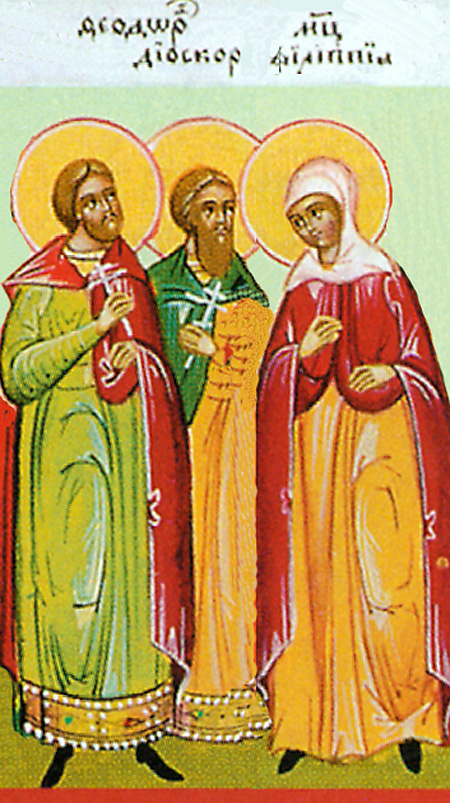 The Holy Martyrs Theodore, his mother Philippa, Dioscorus, Socrates and Dionysius suffered during the reign of the emperor Antoninus Pius (138-161) in Perge, Pamphylia. When they were conscripting robust and healthy young men for military service, then they led the youth Theodore and the others to the military commander Theodotus.

The military commander ordered the youth to offer sacrifice to idols, but the martyr submitted neither to persuasion nor threats. Then the military commander had him placed on a red-hot plate and poured liquid tar on him. Suddenly, there was an earthquake, and a torrent of water gushed forth from the ground and extinguished the fire.

The martyr Theodore remained unharmed, and gave praise to God. The commander ascribed his deliverance to sorcery, so St Theodore suggested that he test the power of his gods by putting the pagan priest Dioscorus through the same trials.

The commander told Dioscorus to lie upon the red-hot plate, and call on the help of Zeus. St Dioscorus replied that he believed in Christ, and he was prepared to throw the idol of Zeus into the fire. Again the military commander commanded him to get on the heated plate. St Dioscorus fell at the knees of St Theodore, asking that he pray for him. Then he got onto the plate, crying out: “I thank You, Lord Jesus Christ, that You have numbered me among Your servants. Accept my soul in peace.” Then he died, having been delivered from terrible torment.

They continued to torture St Theodore. They tied him to wild horses, which began to run. But at the city walls the horses fell down and collapsed, and the martyr Theodore remained unharmed. Two soldiers, Socrates and Dionysius, saw how a fiery chariot came down from the heavens to St Theodore, on which the martyr was carried off.

The astonished soldiers shouted: “Great is the God of the Christians!” They seized them and on the next day threw them into a fiery furnace with the martyr Theodore. But a heavenly dew cooled the furnace, and the saints remained alive.

In the morning, the military commander ordered soldiers to look upon the burned bodies of the martyrs. The soldiers returned and reported that the three youths were unharmed. St Theodore’s mother, Philippa, encouraged the martyrs in their act.

The military commander told St Philippa to save her son, by urging him to offer sacrifice to the idols. St Philippa said that when her son was born it was revealed to her that he would be crucified for Christ. Hearing this, the military commander commanded them to crucify St Theodore, and to cut off the heads of the other martyrs. St Theodore hung on the cross for three days, offering prayers to God until he finally died.