The Hieromartyr Pancratius, Bishop of Taormina 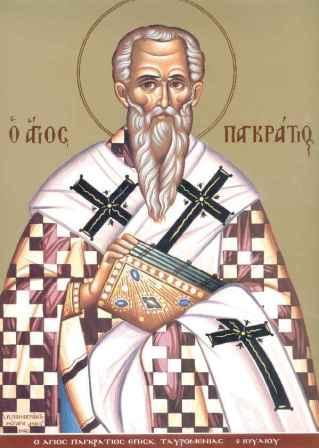 The Hieromartyr Pancratius, Bishop of Taormina, was born when our Lord Jesus Christ yet lived upon the earth.

The parents of Pancratius were natives of Antioch. Hearing the good news of Jesus Christ, Pancratius' father took his young son with him and went to Jerusalem in order to see the great Teacher for himself. The miracles astonished him, and when he heard the divine teaching, he then believed in Christ as the Son of God. He became close with the disciples of the Lord, especially with the holy Apostle Peter. It was during this period that young Pancratius got to know the holy Apostle Peter.

After the Ascension of the Savior, one of the Apostles came to Antioch and baptized the parents of Pancratius together with all their household. When the parents of Pancratius died, he left behind his inherited possessions and went to Pontus and began to live in a cave, spendng his days in prayer and deep spiritual contemplation. The holy Apostle Peter, while passing through those parts, visited Pancratius at Pontus. He took him along to Antioch, and then to Sicily, where the holy Apostle Paul then was. There the holy Apostles Peter and Paul made St Pancratius Bishop of Taormina in Sicily.

St Pancratius toiled zealously for the Christian enlightenment of the people. In a single month he built a church where he celebrated divine services. The number of believers quickly grew, and soon almost all the people of Taormina and the surrounding cities accepted the Christian Faith.

St Pancratius governed his flock peacefully for many years. However, pagans plotted against the saint, and seizing an appropriate moment, they fell upon him and stoned him. Thus, St Pancratius ended his life as a martyr.

The saint's relics are in the church named for him in Rome. He is also commemorated on February 9.

As a flaming arrow You were sent from on high
To the throne of Taormina to wound godless impiety
And to illumine the hearts of the faithful,
Confirming them in the faith through the word of God.
And having completed your course You did suffer unto bloodshed.
O Hieromartyr Pancratius, pray for all who praise your memory.

By sharing in the ways of the Apostles,
you became you became a successor to their throne.
Through the practice of virtue, you found the way to divine contemplation, O inspired one of God;
by teaching the word of truth without error, you defended the Faith, even to the shedding of your blood.
Hieromartyr Pancrátius entreat Christ God to save our souls.

You were a brilliant star in Taormina, O blessed Pancratius,
And You became a hieromartyr for Christ.
Standing before Him now, pray for those who honor you.

Pancrátius, you were revealed as a brilliant star for the people of Taormina;
you were also shown to be a sufferer for Christ.
Since you now stand before Him, O blessed one, pray for those who honor you. 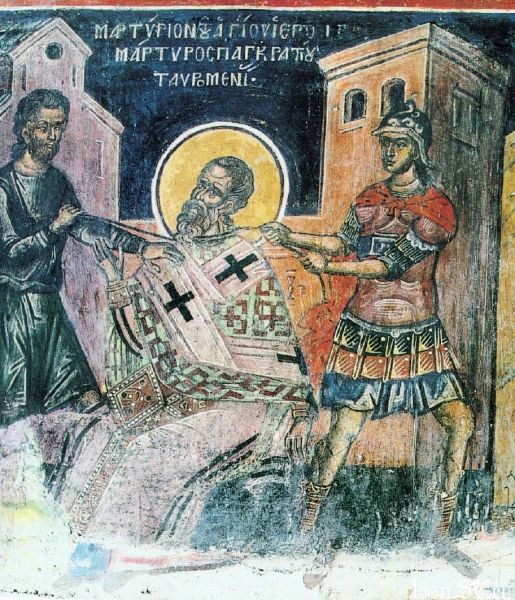