Our Holy Father Theophilus the Outpourer of Myrrh 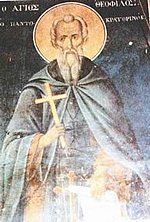 Saint Theophilus was from Ziki in Macedonia, and lived during the sixteenth century. He had a very good education, but more importantly he dedicated himself to God, purifying himself from every soul-destroying passion, and acquiring every virtue which filled him with the grace of the All-Holy Spirit.

He travelled to Alexandria, at the request of Patriarch Niphon of Constantinople, in order to determine whether the stories about Patriarch Joachim being able to move mountains and to drink poison with no ill effects were true or not. After looking into the matter, he was able to verify that these stories were true.

After completing this work, St Theophilus went to struggle on the Holy Mountain, living first at Vatopedi, then at Iveron before settling at St Basil's cell near Karyes. Although he did not seek the praise of men, the fame of the holy ascetic became known on Mount Athos, and in other places as well. His holy life and spiritual gifts could not be hidden, but were revealed by the Lord.

When the Archbishop of Thessalonica reposed, St Theophilus was nominated for this office. Out of humility, however, he declined to accept the position.

In 1548, as he felt the approach of death, St Theophilus told his disciple Isaac not to give him an honorable burial, but to tie a cord around his feet and drag him out of the monastery, and then to throw his body into a nearby stream.

When the saint fell asleep in the Lord on July 8, 1548, Isaac carried out the instructions of his Elder. Although he was reluctant to do this, he obeyed the saint just as he had always done when St Theophilus was alive.

By God's will, the holy relics of St Theophilus were later found and brought to his cell. Then a fragrant myrrh began to flow from the saint's incorrupt body, which was later enshrined at the Pantokrator Monastery.