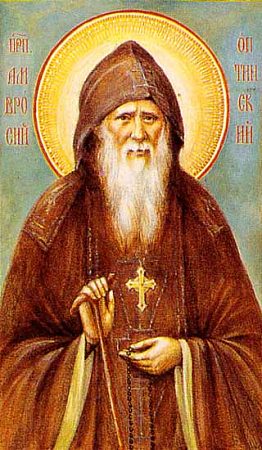 Saint Severus the Presbyter during the sixth century served in a church of the Most Holy Theotokos in the village of Interocleum in Central Italy. He was noted for his virtuous and God-pleasing life. One time, when the saint was working in his garden, cutting grapes in the vineyard, they summoned him to administer the Holy Mysteries for the dying. St Severus said: "Go back, and I'll catch up with you soon."

There remained only but a few more grapes to cut off, and St Severus dallied for awhile in the garden to finish the work. When he arrived at the sick person's home, they told him that the person was already dead. St Severus, regarding himself as guilty in the death of a man without absolution, started to tremble and loudly he began to weep. He went into the house where the deceased lay.

With loud groans and calling himself a murderer, in tears he fell down before the dead person. Suddenly the dead man came alive and related to everyone that the demons wanted to seize his soul, but one of the angels said, "Give him back, since the priest Severus weeps over him, and on account of his tears the Lord has granted him this man." St Severus, giving thanks to the Lord, confessed and communed the resurrected man with the Holy Mysteries. That man survived for another seven days, then joyfully went to the Lord.