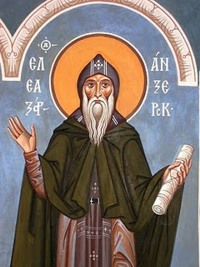 Saint Eleazar of Anzersk was born in the city of Kozelsk into the merchant family Severiukov. With the blessing of his parents he went off to the Solovki monastery, where he received monastic tonsure from the igumen St Irenarchus (July 17).

At the monastery he displayed an astonishing artistic gift: he learned woodcarving and he took part in the embellishment of the Transfiguration cathedral. With the blessing of the igumen, he went to the island of Anzersk in 1612, where he became a hermit, devoting himself to constant prayer and meditation on God.

In order to obtain subsistence for himself on the island wilderness, St Eleazar carved wooden cups, which he left at the dock. On the cups he wrote a message requesting food. Fishermen left bread and other supplies for the ascetic, and they were rewarded with a great catch of fish.

In the year 1616 St Eleazar was elevated to schemamonk. Disciples gathered around the saint wishing to live near him and benefit from his instruction. He organized a skete with a strict rule of monastic life following the ancient form. Monastic cells were built far away from one another, and the hermits gathered together only for Saturday and Sunday services.

Among the disciples of St Eleazar was the hieromonk Nikita, the future Patriarch Nikon. Tsar Michael (1613-1645), learning of the saint’s ascetic life, summoned him to Moscow. St Eleazar predicted the birth of a son, and in return the Tsar generously gave him help to build a stone church on the island dedicated to the Holy Trinity, and also a monastery.

St Eleazar died in great old age, forseeing the time of his death. It is not known how old he was, but he lived at Ansersk for forty years, and he was at Solovki for some time before that. 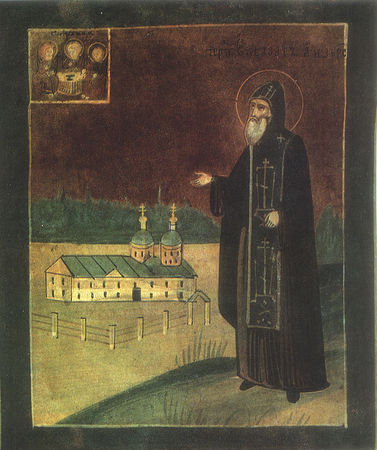