Venerable Irenarchus the Recluse of Rostov (1616) 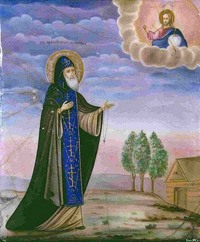 Irenarchus, Hermit of Rostov, was born into a peasant family in the village of Kondakovo in the Rostov district. In Baptism he received the name Elias. In his thirtieth year, he was tonsured a monk at the Rostov Sts Boris and Gleb monastery. There he began fervently to labor at monastic tasks, he attended church services, and by night he prayed and slept on the ground. Once, taking pity on a vagrant who did not have shoes, St Irenarchus gave him his own boots, and from that time he began to go barefoot through the snow.

The igumen did not care for such behavior, and he began to humiliate him, compelling him to stand for an hour or nearly two in the snow opposite his cell, or to ring the bells for a long time. The saint endured everything with patience but he did not change his conduct. The igumen continued to be hard-hearted, and the monk was obliged to transfer to the Abramiev Theophany monastery, where he was accepted into the number of the brethren and he was soon chosen as steward.

The saint fulfilled his monastic obediences with zeal, but grieved that the brethren and servants did not look after the property of the monastery, but imprudently wasted it. Once in a dream he saw St Abraham of Rostov (October 29), who comforted him and blessed him to distribute necessities to all without trouble. Later, St Irenarchus sobbed loudly during the singing of the Cherubimic hymn. The archimandrite asked him why he wept, and he answered, “My mother has died!”

Leaving Abramiev monastery, St Irenarchus transferred to the Rostov monastery of St Lazarus, settled into a solitary cell and lived for three years in privation and hunger. Here he was visited by Blessed John the Fool, nicknamed “the Big Simpleton.” The saints encouraged each other by spiritual conversation. The Elder, however, had a desire to return to the Sts Boris and Gleb monastery. He was accepted back with love by the strict Barlaam, and he began to pursue even greater ascetic deeds at the monastery.

Having withdrawn into solitude, St Irenarchus chained himself to a wooden chair, and he placed on himself heavy chains and crosses. For this he endured the mockery and sneers of the brethren. During this time he was visited by his old friend, Blessed John the Fool, who predicted the Lithuanian invasion of Moscow.

St Irenarchus spent twenty-five years shackled in chains and in arduous tasks. His ascetic deeds were a silent reproach to those living carelessly at the monastery, and they lied to the igumen about him. They said that the Elder taught that they should not do monastic work, but rather pursue asceticism as he did. The igumen believed the slander and he banished the holy Elder from the monastery. Humbly submitting, St Irenarchus again went to Rostov and lived in the monastery of St Lazarus for one year.

Meanwhile the igumen of Sts Boris and Gleb regretted his conduct and sent monks after St Irenarchus. He returned, blaming himself that he did not live like the brethren who engaged in righteous works, in which he was lacking. The monk continued to bear his own heavy fetters. He made clothes for the needy, and he knitted hairshirts and klobuks. He slept at night for only an hour or two, the rest of the time he prayed and beat his body with an iron rod.

St Irenarchus had a vision that Lithuania would invade Moscow, and that churches there would be destroyed. He began to weep bitterly about the impending disaster, and the igumen ordered him to go to Moscow and warn Tsar Basil Shuisky (1606-1610) about the terrible misfortune. St Irenarchus carried out the order. He refused the gifts offered him and when he returned, he began to pray fervently that the Lord would show mercy on the Russian land.

Enemies appeared against Russia, they began the conquest of the city, beat the inhabitants, and robbed churches and monasteries. The False Demetrius and a second Pretender sought to conquer Russia for the Polish king. Sts Boris and Gleb monastery was also overrun by the enemy, who came to the holy hermit and were amazed at the direct and bold words of the Elder, predicting catastrophe for them.

Sapega, remaining at the Sts Boris and Gleb monastery, wanted to see the Elder sitting in chains, and he was amazed at such an ascetic exploit. When the Polish nobles with Sapega told him that the Elder prayed for Shuisky, the monk boldly said, “I am born and baptized in Russia, and I pray to God for the Russian Tsar.” Sapega answered, “Grandfather speaks truly; in whatever land one lives, there one also serves.” After this St Irenarchus began to urge Sapega to leave Russia, predicting death for him if he did not do so.

St Irenarchus followed the course of the war and sent his blessings and a prosphora to Prince Demetrius Pozharsky. He told him to come to Moscow, predicting, “You shall see the glory of God.” To assist Pozharsky and Minin, the saint handed over his cross. With the help of God the Russians vanquished the Lithuanians, Prince Pozharsky took possession of the Kremlin, and peace gradually began to return to the Russian land. St Irenarchus incessantly prayed God with tears for the deliverance of Russia from enemies and, with the power to work miracles, he healed the sick and demoniacs.

The day of his death was revealed to him, and summoning his disciples Alexander and Cornelius, he gave them his final instructions. After taking leave of all he quietly fell asleep in the Lord. The holy Elder left behind 142 copper crosses, seven shoulder chains, other chains which he wore on his neck, iron foot shackles, eighteen hand fetters, heavy “bonds” which he wore on his belt, and iron rods with which he thrashed his body to drive away demons.

In these works, as the Elder called them, he spent thirty-eight years, and having lived in the world for thirty years, he died in his sixty-eighth year. After the death of St Irenarchus, many miracles took place at his grave, especially the healing of the sick and the demoniacs by laying the holy ascetic’s crosses and chains upon them.