Feast of the Tikhvin Icon of the Mother of God 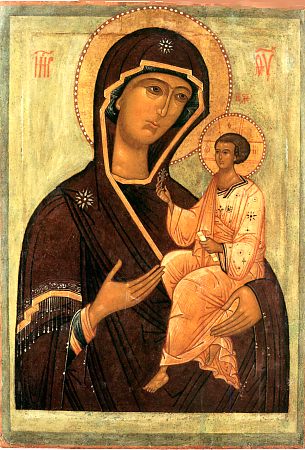 According to ancient tradition, the wonderworking icon of Tikhvin is one of several painted by St Luke the Evangelist. The icon was taken from Jerusalem to Constantinople in the fifth century, where it was enshrined in the Church of Blachernae, which was built especially for this purpose.

In 1383, seventy years before the fall of Constantinople at the hands of the Turks, fishermen on Lake Ladoga in the principality of Novgorod the Great witnessed the icon miraculously hovering over the lake's waters amidst a radiant light. According to an early sixteenth century Russian manuscript, "The Tale of Miracles of the Icon of the Tikhvin Mother of God," the Theotokos herself decided that her image should leave Constantinople, perhaps in anticipation of the impending fall of the Byzantine Empire.

Shortly after its miraculous appearance, the icon was discovered in several neighboring towns, including the village of Motchenitsy on the bank of the Tikhvinka River, before it finally appeared near the town of Tikhvin. A wooden church dedicated to the Dormition of the Theotokos was built on the site of the icon's final resting place. Miraculously, the icon survived a number of fires.

In the early sixteenth century, through the zeal of Great Prince Basil Ivanovich, a stone church was built to replace the original wooden structure. In 1560, by order of Tsar Ivan the Terrible, a men's monastery was established near the church and enclosed with a stone wall.

In 1613-1614, the Swedish army, having seized Novgorod, made several attempts to destroy the monastery. The countless prayers offered to the Theotokos before the icon were heard, and the monastery was spared. On one occasion, after monks had been alerted to the approaching Swedish army, they decided to flee and to take the icon with them. But the monks soon discovered that they could not remove the icon from its shrine. Seeing this as a sign of the Theotokos' protection, the monks decided not to abandon the monastery, begging the Theotokos to spare them and their beloved spiritual home. To their amazement, a large Muscovite army appeared to defend the monastery.

When the Swedes encountered the army, they retreated immediately. Word of this miracle spread rapidly, and imperial emissaries soon visited the monastery. Accompanied by a copy of the wonderworking icon, they set off for the village of Stolbovo, 33 miles from Tikhvin, where they concluded a peace treaty with the Swedes on February 10, 1617. Afterwards, the copy of the icon was taken to Moscow and enshrined in the Kremlin's Dormition Cathedral. Later, the same icon was placed in the Holy Wisdom (Hagia Sophia) cathedral in Novgorod at the request of the city's faithful, who also found themselves under attack by the Swedes. Once again, through the intercession of the Theotokos, the city was spared.

Over the centuries, the icon's fame spread far and wide. Copies of the wonderworking icon began to adorn churches throughout the land. Some of these copies also proved to be sources of miracles, and it was not uncommon to find the faithful praying before the icon to seek healing for children who were ill.

No fewer than 24 processions with the icon were celebrated each year at the Tikhvin Monastery, where the icon was enshrined. A decorative cover, or "riza," adorned the icon, exposing only the faces and hands of the Holy Virgin and Christ child. Numerous precious stones studded the riza, and many of the faithful, desiring to express thanksgiving for prayers answered through the Theotokos' intercession, affixed precious jewelry to the riza.

Most miraculous is the fact that the icon was preserved from destruction or sale after the Russian Revolution, which ushered in a 74-year persecution of the Church. During the 1920s, the communist government demanded that the Russian Orthodox Church turn over countless icons and other precious liturgical items, which through the nationalization of private property were considered the property of "the people." Many of these sacred items were sold, allegedly to raise money to feed the Russian and Ukrainian population which was afflicted by famine.

During the World War II German occupation, the Nazis removed the icon from the Tikhvin Monastery, from where it was taken to Pskov and subsequently to Riga, Latvia. When the city was evacuated, Bishop John [Garklavs] of Riga, in whose care the icon was placed, took the icon to Bavaria, where it was venerated by Orthodox faithful who had been displaced because of the war. While Soviet agents had spotted the icon, Bishop John was permitted to take the icon to the United States in 1949, under the pretext that the icon in his care was a reproduction, the work of a simple monk, and that it was of little historic or monetary value. Shortly after his arrival in the United States, Bishop John, who was later elevated to the rank of Archbishop, was elected to oversee the Diocese of Chicago, and the icon was regularly displayed and venerated in Chicago's Holy Trinity Cathedral.

Bishop John frequently took the icon on pilgrimage to various places throughout the United States and Canada. After his retirement in the late 1970s and death on Palm Sunday in 1982, Archpriest Sergei Garklavs, Bishop John's adopted son, became the caretaker of the icon. In 2003, over a decade after the fall of communism and the resurrection of the Russian Orthodox Church, the decision was made to return the precious icon to its original home.

The icon began its year-long journey to Russia at the 99th annual Pilgrimage to St Tikhon Monastery, South Canaan, Pennsylvania, May 23-26, 2003. His Beatitude, Metropolitan Herman, Primate of the Orthodox Church in America, together with members of the Holy Synod of Bishops and guest hierarchs, greeted the icon, which was available for veneration by the faithful.

The icon follows the "Hodigitria" model and is similar in style to the ancient Iveron icon of Our Lady. It differs in that the Christ child's legs are crossed, while the sole of His foot is turned to the viewer. Several historic sources note that several other Hodigitria icons of the Theotokos had been brought to Russia in the 1380s, during the rule of the saintly prince Demetrius Donskoy.

Today, like the eternal sun,
Your Icon appears in the sky, O Theotokos.
With rays of mercy it enlightens the world.
This land accepts the heavenly gift from above,
Honoring You as the Mother of God.
We praise Christ our Lord who was born of You.
Pray to Him, O Queen and sovereign virgin
That all Christian cities and lands be guarded in safety, And that He save those who kneel to His divine, and Your holy image, O unwedded bride.

O people, let us come to the Virgin Queen and Mother, giving thanks to Christ God.
Let us fall before her miraculous image, and let us cry:
O sovereign Mary, your glorious image now inhabits this land.
Save all the Christians of this world, showing us the heavenly life.
To You we faithfully cry: Rejoice, O Virgin, the salvation of the world!