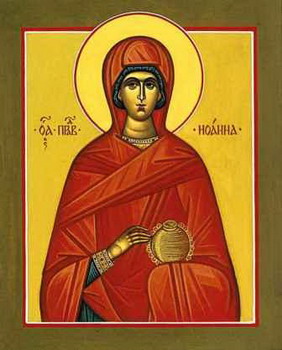 Saint Joanna the Myrrh-bearer, wife of Chusa, the household steward of King Herod, was one of the women following and attending the Lord Jesus Christ during the time of His preaching and public ministry. She is mentioned in Luke 8:3 and 24:10. Together with the other Myrrh-bearing Women, St. Joanna went to the Sepulchre to anoint the Holy Body of the Lord with myrrh after His death on the Cross, and she heard from the angels the joyful proclamation of His All-Glorious Resurrection. According to Tradition, she recovered the head of St. John the Baptist after Herodias had disposed of it (February 24).

St. Joanna is also commemorated on the Sunday of the Myrrh-bearing Women.