Venerable Theodulus, son of the Venerable Nilus of Sinai 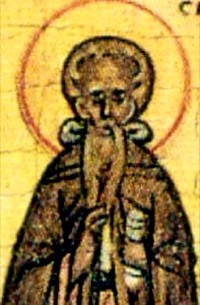 Saint Theodulus was the son of St Nilus the Faster (November 12), and he recorded the slaughter of the holy Fathers at Raithu in the fifth century. While still a child, St Theodulus left the world and went to Mount Sinai with his father.

During a barbarian assault on the desert dwellers, the saint fell into the hands of brigands, who decided to offer the youth as a sacrifice to the morning dawn, which they worshipped in place of God. But the Lord saved the boy through the prayers of his father, St Nilus. The barbarians slept past sunrise, and giving up on the idea of making him a sacrificial offering, they took the youth with them.

Brought by the brigands to the city of Eluza, St Theodulus was ransomed by the local bishop, in whose house he was later found by his grateful father. Blessed by the bishop and presbyters, Sts Theodulus and Nilus returned to Mount Sinai, where they served the Lord until the end of their days. Their incorrupt relics were transferred to Constantinople under Emperor Justin the Younger (565-578) and placed in the church of the holy Apostles at Orphanotrophia.