Feast of the Hodigitria Icon of the Mother of God 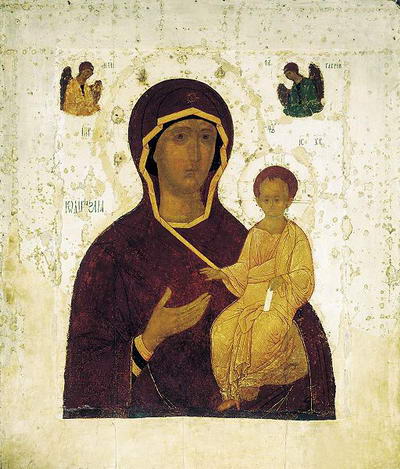 Luke the Evangelist painted this icon on wood himself. When the most holy Mother of God saw it, she was pleased with it and blessed it. St Luke presented the icon to Theophilus, a state official for whom he wrote the Acts of the Apostles. The icon was later taken from Antioch to Jerusalem, and sent from there by the Empress Evdokia to Constantinople as a gift for Pulcheria, the Emperor"s devout sister. Pulcheria placed it in the Church of Blachernae, which was her own foundation. The most holy Mother of God once appeared to two blind men and led them into the church to her icon, and restored the sight of them both. For this reason, the icon has become known as "Hodigitria"- "She who shows the way". When the armies of the Persian king, Chozroes, and of Kagan, leader of the Scythians, attacked Constantinople, Patriarch Sergius carried the icon around he city ramparts, and the most holy Mother of God saved the Christians from the unbelievers. The forces of the enemy became confused. the sea began to heave about and the boats began to sink. The enemy soldiers who remained alive saved themselves by fleeing. Ever since then, a commemoration of this miracle wrought by the most holy Mother of God has been held on the Saturday of the Fifth Week of the Great Fast, with the reading of the Akathist. During the iconoclast period, this icon was taken to the monastery of the Pantocrator and sealed up in a wall with a burning lamp hanging before it. It was found later, unharmed by its immuring.