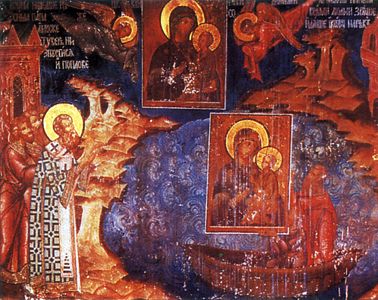 The wonder-working Lydda Icon is mentioned in the service for the Kazan Icon (July 8 & October 22) in the third Ode of the Canon.

According to Tradition, the Apostles Peter and John were preaching in Lydda (later called Diospolis) near Jerusalem. There they built a church dedicated to the Most Holy Theotokos, then went to Jerusalem and asked her to come and sanctify the church by her presence. She sent them back to Lydda and said, "Go in peace, and I shall be there with you."

Arriving at Lydda, they found an icon of the Virgin imprinted in color on the wall of the church (some sources say the image was on a pillar). Then the Mother of God appeared and rejoiced at the number of people who had gathered there. She blessed the icon and gave it the power to work miracles. This icon was not made by the hand of man, but by a divine power.

Julian the Apostate (reigned 361-363) heard about the icon and tried to eradicate it. Masons with sharp tools chipped away at the image, but the paint and lines just seemed to penetrate deeper into the stone. Those whom the emperor had sent were unable to destroy the icon. As word of this miracle spread, millions of people came to venerate the icon.

In the eighth century, St Germanus, the future Patriarch of Constantinople (May 12) passed through Lydda. He had a copy of the icon made, and sent it to Rome during the iconoclastic controversy. It was placed in the church of St Peter, and was the source of many healings. In 842, the reproduction was returned to Constantinople and was known as the Roman Icon (June 26).

The oldest sources of information for the Lydda Icon are a document attributed to St Andrew of Crete in 726, a letter written by three eastern Patriarchs to the iconoclast emperor Theophilus in 839, and a work of George the Monk in 886.

The icon still existed as late as the ninth century.

The Lydda Icon of the Mother of God is also commemorated on March 12.