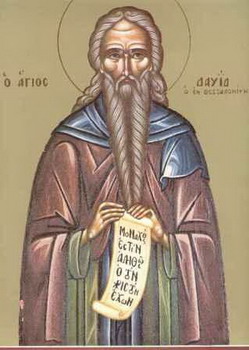 Saint David of Thessalonica pursued asceticism at the monastery of the holy Martyrs Theodore and Mercurius. Inspired by the example of the holy stylites, he lived in an almond tree in constant prayer, keeping strict fast, and enduring heat and cold. He remained there for three years until an angel told him to come down.

St David received from God the gift of wonderworking, and he healed many from sickness. The holy ascetic gave spiritual counsel to all who came to him. Having attained to passionlessness, he was like an angel in the flesh, and he was able to take hot coals into his hands without harm. He died the year 540.

The image of God was truly preserved in you, O Father,
for you took up the Cross and followed Christ.
By so doing doing you taught us to disregard the flesh for it passes away
but to care instead for the soul, since it is immortal.
Therefore your spirit, venerable David, rejoices with the angels.

We bless you, servant of God David;
you are like the angels and estranged from earthly things.
Now you rejoice in divine gifts.
Grant us to share in them also, O holy and righteous Father!