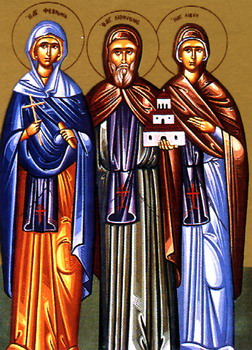 The founder of the monastery of St John (Dionysiou) on Mount Athos, he was born in Koritza in Albania. His elder brother, Theodosius, went off to the Holy Mountain and became for a time abbot of the monastery of Philotheou. When St Dionysius had grown up, he went to his brother at Philotheou and became a monk at his hand. By divine dispensation, when Theodosius was engaged on some business for his monastery in Constantinople, he was elected and consecrated Metropolitan of Trebizond. A wondrous light began to appear to Dionysius each night on the spot where he later built the monastery of St John the Forerunner. Understanding the light as a sign from heaven that he was to build a monastery, Dionysius went to Trebizond to seek help from his brother and from the Emperor Alexius Comnenis. The Emperor gave him both money and a Royal Charter, which is still preserved in the monastery. Dionvslus founded the monastery of St John the Forerunner in 1380. When pirates plundered the monastery, Dionysius went again to Trebizond, and there finished his earthly course at the age of seventy-two. Dionysiou still flourishes like a flower to the present day. An icon of the Mother of God known as ,Of the Praises", a gift from the Emperor Alexius Comnenis to Dionysiou, can be found in the monastery. According to tradition, it was before this icon that the Akathist to the Mother of God, composed by Patriarch Sergius, was read for the first time.