The Venerable Nicetas Of The Monastery Of The Caves In Kiev 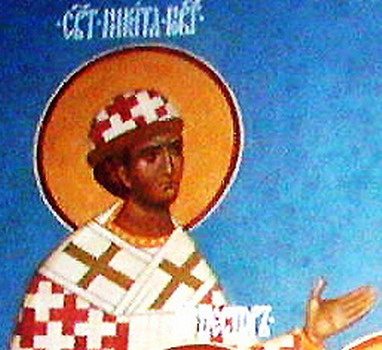 Saint Nikita, Bishop of Novgorod, in his youth entered the Kiev Caves monastery and soon wished to become a hermit. The igumen cautioned him that such an exploit was premature for a young monk, but he, trusting in his own strength, would not listen.

In the hermitage St Nikita fell into temptation. The devil appeared to him in the guise of an angel, and the inexperienced ascetic bowed down to him. The devil gave him advice, speaking as if to one who had attained perfection: "Don't bother to pray, just read and study other things, and I shall pray in your place." He stood near the hermit, giving the appearance of praying. The deceived monk Nikita came to surpass everyone in his knowledge of the Books of the Old Testament, but he would not speak about the Gospel, nor did he wish to hear it read.

The Elders of the Kiev Caves went to the monk, and after they had prayed, they expelled the devil from him. After this St Nikita remained a hermit with the blessing of the Elders, and lived in strict fasting and prayer, surpassing everyone in obedience and humility.

Through the prayer of the holy Elders, the merciful Lord brought him up from the depths of his fall to a high degree of spiritual perfection. Afterwards, he was made Bishop of Novgorod, and for his holy life God granted him the gift of wonderworking. Once, during a time of drought, he brought rain from the heavens by his prayers. Another time, he stopped a fire in the city. St Nikita guided the Novgorod flock for thirteen years, and then peacefully fell asleep in the Lord in 1109.

In 1558, during the reign of Tsar Ivan Vasilievich, Bishop Nikita was glorified as a saint. His relics now rest in the church of the holy Apostle Philip in Novgorod. He is also commemorated on May 14.

St Nikita is invoked for protection against lightning and fire. People also turn to the Most Holy Theotokos, glorified in her "Unburnt Bush Icon" (September 4), for this purpose.