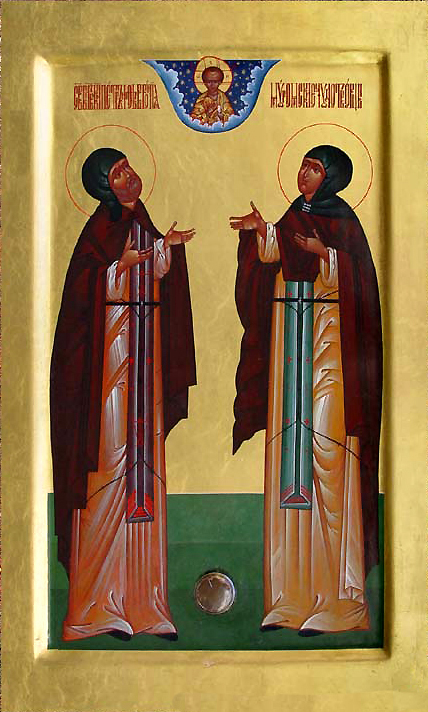 Holy Prince Peter, in monasticism David, and Holy Princess Febronia, in monasticsm Evphrosynia, Murom Wonderworkers: Holy Prince Peter was the second son of the Murom prince Yurii Vladimirovich. He entered upon the throne of Murom in the year 1203. Several years before this Saint Peter had fallen ill with leprosy, from which no one was able to heal him. In a dream vision it was revealed to the prince, that the daughter of a bee-keeper would be able to heal him – the pious maiden Febronia, a peasant of Laskova village in Ryazan gubernia. Saint Peter sent his emissaries to this village.
When the prince saw Saint Febronia, he so fell in love with her for her piety, wisdom and virtue, that he made a vow to marry her after being healed. Saint Febronia healed the prince and became his wife. The holy couple loved each other through all their ordeals. The haughty boyars did not wish to have a princess of commoner's origin and they urged, that the prince leave her. But Saint Peter refused, and so they banished the couple. They sailed off on a boat from their native city along the River Oka. Saint Febronia continued to console Saint Peter. But soon the wrath of God fell upon the city of Murom, and the people urged, that the prince return together with Saint Febronia.
The holy couple was famous for its piety and charity. They died on the same day and hour – 25 June 1228, having before this taken monastic tonsure with the names David and Evphrosynia. The bodies of the saints were put in the same grave.
Saints Peter and Febronia showed themselves exemplary models of Christian marriage.
By their prayers they bring down Heavenly blessing upon those entering into marriage. 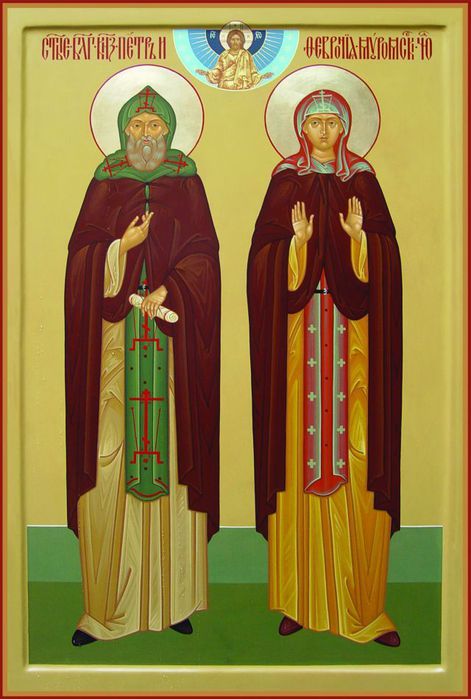