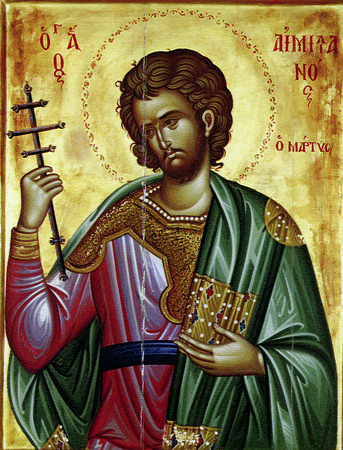 The Holy Martyr Emilian, a Slav, suffered for Christ during the reign of the emperor Julian the Apostate (361-363). Julian wanted to restore in the Roman empire the cult of the pagan gods, and he circulated an edict throughout all the regions, according to which all Christians would be subject to death.

The city of Dorostolum, situated on the banks of the River Dunaj (Danube), where St Emilian lived, was governed by an official named Capitolinus. The imperial edict was read in the city square. The people of Dorostolum said that there were no Christians in the city.

St Emilian was a slave of the local city-head, and he was secretly a Christian. Emboldened by the harsh edict, St Emilian snuck into the pagan temple, he destroyed statues of the idols with a hammer, he overturned the altars and the candle-stands, and then emerged without notice. But soon the pagans discovered, that the pagan-temple was in ruins. An angry crowd began to beat up a certain Christian, who by chance happened by. St Emilian then shouted out loudly, that they should not lay hold of that innocent man, and then he said that he himself had wrecked the pagan-temple.

They seized him and led him for judgment to Capitolinus. By order of the official, St Emilian was for a long time beaten mercilessly, and then he was condemned to burning. Thrown into a bon-fire, he did not perish, but rather the flames burnt many of the pagans standing about. And when the bon-fire had gone out, St Emilian lay down upon the dying embers and with a prayer gave up his spirit to the Lord. At Constantinople afterwards there was built a church in honor of the holy Martyr Emilian, where they transferred his relics.

Holy martyr Emilian,
you defended the Church against the idolatry of the pagans.
Because of your faith in Christ,
you were martyred by fire and through a glorious death received your crown.
Pray to Christ God that He may grant us great mercy.

You did not fear the fire, your fellow-servant,
for you were enflamed with divine zeal.
You willingly entered the flames, unconsumed by the fury,
offering yourself yourself in sacrifice to the Lord.
Glorious martyr Emilian, entreat Christ God to grant us His great mercy.