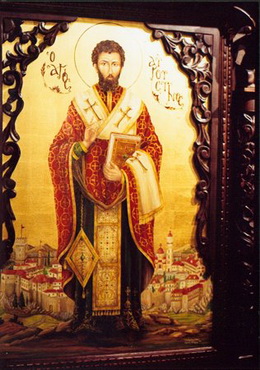 Blessed Augustine was born in Africa, in the city of Tagaste (Thagaste). He was raised by his mother, the pious Christian Monica, and he received his education at Carthage. In the capacity of professor of rhetoric, Augustine arrived at Mediolanum (Milan in Italy) during the period of episcopacy of Sainted Ambrose (+ 397, Comm. 7 December). Under the guidance of Saint Ambrose, Augustine studied the Holy Scriptures. The Word of God produced in his soul a radical crisis – he accepted holy Baptism, gave all his wealth to the poor and was vowed into the monastic form.
In the year 391 Valerian, bishop of Ipponesia (Hippo), ordained Saint Augustine to the dignity of presbyter; and in 395, – to the dignity of bishop, appointing him vicar-bishop to the Ipponesia cathedra. After the death of Bishop Valerian, Sainted Augustine took his place.
During his 35 years as bishop, many of the works of Blessed Augustine were devoted to combating the Donatist, Manichaean and Pelagian heresies.
Blessed Augustine wrote many works (in the testimony of his student and biographer Possidias, the number approached 1030). Of his works the best known are: "The City of God" ("De civitate Dei"), "The Confessions", 17 Books against the Pelagians and "Handbook of Christian Knowledge" ("the Enchiridion"). Blessed Augustine was concerned above all else that his compositions be intelligent and edifying. "It is better, – he said, – for them to condemn our grammar, than that people do not understand". Blessed Augustine died on 28 August 430.