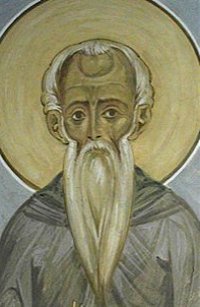 The Monk Varnava (Barnabas) of Vetluzhsk was born in Great Ustiug. Before going off into the wilderness he was a priest in one of the city churches. In 1417 the monk settled at one of the banks of the River Vetluga at Red Hill (Krasnaya Gora), where he asceticised in solitude over the course of 28 years, "toiling for God in psalmody and prayer, he subsisted on grass and acorns". In the words of the author of the Life of the saint, there came also to Saint Varnava "wild animals, and many a bear did live nigh to his cell... He however did walk amongst them, as though amongst cattle, watching after them and delighting with them; rejoicing in the great God that these beasts were become tame for him".
In the surroundings of Red Hill as far off as 50 versts, there was not a single human habitation. Occasionally wilderness people would visit "for a blessing", and he would predict to them, that after his repose on the banks of the River Vetluga "God would multiply the human habitation, and upon the place of his dwelling monks would live".
According to tradition, in 1439, before he settled at the River Unzha, the Monk Makarii (Comm. 25 July) came hither for instruction and guidance. The Monk Varnava died in old age on 11 June 1445. After the end of the ascetic, at the place of his efforts there came to dwell "from various lands" many a monk and "after them farmers" and "many people did spread all along this river all the way to the great River Volga". At Red Hill the monks built two churches – the one in honour of the MostHoly Trinity, and the other, over the grave of the monk – in the name of Saint Nicholas the Wonderworker, and they founded a common-life monastery, which received as its name "the Varnavinsk wilderness-monastery". The Vita of Saint Varnava was written in 1639 by a monk of the Varnavinsk monastery – "the very venerable priest-monk Iosif (Dyadkin), who was afterwards in the imperial city of Moscow the chief director of the directory of book printing". For the authentication and verification of the miracles, which occurred at the grave of the monk, in that same year of 1639 there was a witnessing of the holy relics under the direction of Patriarch Joasaph.
With the passing of time at the place of the Varnavinsk monastery there arose the district town Varnavin, and the chief church of the monastery became the cathedral church in the name of the Disciple Barnabas.