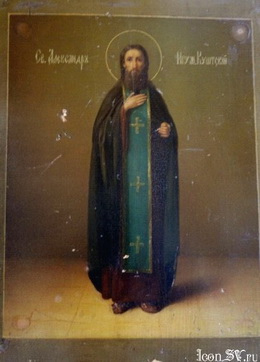 The Monk Alexander, Hegumen of Kushtsk, of Vologda, was born about the year 1371 in Vologda, and in the world he had the name Alexei. He was vowed a monk at the Saviour-Stone (Spaso-Kamenni) monastery by the hegumen Dionysii Svyatogorets (i. e. Dionysii "of the Holy Mountain"), who brought the Athos ustav (rule) to the monastery. Here the Monk Alexander underwent all the aspects of obedience and strict fasting and was granted the dignity of priest-monk. He dwelt constantly at work and prayer. The brethren looked upon him as upon an Angel of God, and this troubled the Monk Alexander. He left the monastery secretly by night and came to the River Syazhem, where there was a thick forest and lake. Here he built himself a cell and lived life in prayer and extreme abstinence. But little by little people began to come to him. The Monk Alexander went from this place to the shore of Lake Kuben, at the mouth of the Kushta rivulet. Here at this time lived the Monk Evphymii (+ c. 1465, Comm. 11 April). Saint Alexander offered him to exchange cells. Saint Evphymii was agreeable and at parting left to the Monk Alexander his cross for blessing. The quiet wilderness was very dear to the Monk Alexander. Going to the lake, he immersed the cross in the water and prayed to God, that he would collect here those zealous of the way of the cross. After some time there came to the Monk Alexander a certain starets (elder), with whom he dwelt for 5 years. When a third brother arrived, the Monk Alexander decided to build a church in honour of the Uspenie (Dormition) of the MostHoly Mother of God. The saint set off to Rostov to Archbishop Dionysii (1418-1425), his former hegumen, who blessed the construction of the temple. One time, in the absence of the Zaozersk prince Dimitrii Vasil'evich the Tatars came, and five of them galloped up to the Kushtsk monastery. The Monk Alexander calmly met them and blessed with the cross. The Tatars fell down as though dead, and they lay senseless for several hours, after which time the Monk Alexander roused them from their numbness by the Name of the Life-Originating Trinity.
Upon the death of prince Dimitrii, his widow princess Maria, – who quite revered the Monk Alexander, offered in remembrance of her husband a village for the aid of the monastery. One time she came to the monastery and went into the church, where the Monk Alexander, with a bare chest whereon insects made attack, read the Psalter. The monk seemed distressed by her visit and said: "It does not become thee, princess, to look upon our poverty". The princess humbly asked pardon. The monk blessed her, but said: "Nourish thy poverty at home". Having returned, the princess fell sick and came to ask prayers for recovery of health. But the Monk Alexander foresaw her end and said: "Be prepared for this life". Princess Maria died 20 days later.
Upon the monastery floor was gathered wheat. A certain peasant decided to steal a sack, but he was not able to lift it. The monk came upon him and said: "My son, thou dost lift in vain". The surprised thief threw himself at the feet of the saint, asking forgiveness, but the Monk Alexander ordered him to put in more wheat, and having admonished him in future not to take away from others, he blessed him to take the sack and go with God. The forgiven peasant easily shouldered the blessed burden, thanking the magnanimous elder.
Having sensed the nearness of his end, the Monk Alexander said to those dwelling with him: "I weaken, but do ye endure in this place, preserving humility and mutual love". On Sunday he made the Divine Liturgy, and communed the Holy Mysteries. Then on his knees he prayed for himself and for his monastery, and at age 68 he peacefully gave up his spirit to the Lord on 9 June 1439.
According to the last-will instructions of the Monk Alexander, his body was placed at the mid-day side of the altar. A year afterwards there grew over his grave a rowen-berry tree. One time on the feastday of the Uspenie (Dormition) of the MostHoly Mother of God, a peasant child broke off a branch from this tree and suddenly his hand began to hurt. His parents with prayers led their son to the grave of the monk, and he was healed. From that time people began to pick berries from this tree for healing. His disciples built over the grave of the Monk Alexander a warm church in honour of Saint Nicholas and dedicated it on the day of memory of the Monk Alexander. Many of the sick, which they brought to the church, saw the Monk Alexander together with Saint Nicholas, praying together or censing the temple. The sick received healing at the grave of the Monk Alexander of Kushtsk. 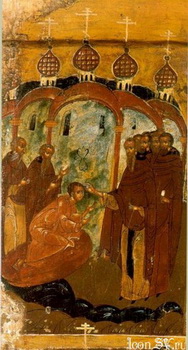 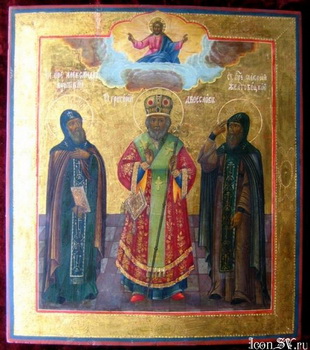