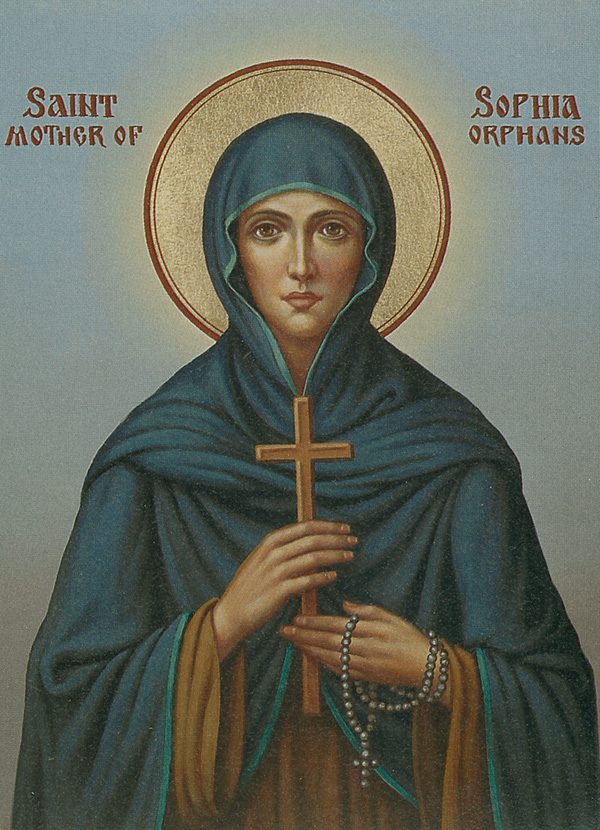 Our venerable Mother Sophia was born in the province of Ainos in southeastern Thrace , and was the daughter of pious Christian parents. When she was of age, her parents arranged for her to be married. She and her husband had six children. Though she was occupied with worldly cares and responsibilities, she still kept the commandments of God and lived a virtuous life. She loved to attend the Church services, and so she progressed in virtue.

After sickness carried off Sophia's husband and all her children in succession, she did not despair, but became even more devoted to God. Within a period of twenty years, she adopted one hundred children, and raised them to love God. Because of this, she is sometimes called St Sophia the Mother of Orphans. She sold her property and gave the proceeds to the poor and to widows. She led an austere life, eating nothing but bread and water. She preferred to do without the necessities of life herself rather than allow any poor person to leave her home empty-handed. The Psalms of the Prophet-King David were always on her lips, and tears flowed continuously from her eyes.

Because of her humility and her love for the poor, God blessed her in the following way. In her home there was a container of wine which she reserved for the poor. She noticed that no matter how much she took from the container, it remained full. However, as soon as she told someone about the miracle and glorified God, the container became empty. St Sophia became sorrowful, believing that the wine had failed because of her unworthiness. Therefore, she increased her ascetical labors until her health suffered.

Sensing that the end of her life was near, she received the monastic tonsure. From that time, she devoted herself completely to the worship of God. St Sophia reposed peacefully at the age of fifty-three. It is not known when she lived.