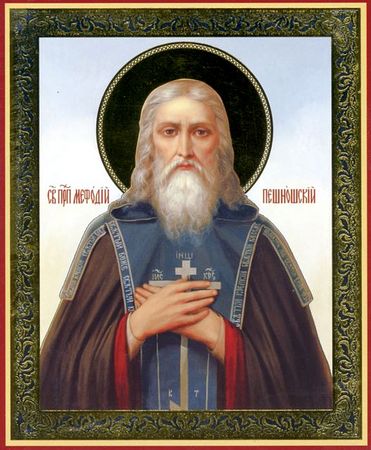 The Monk Methodii, Hegumen of Peshnozh (XIV), was the founder of the Peshnozh monastery. In his youth he went to the Monk Sergei of Radonezh and spent several years under his guidance; later on, with the blessing of the Monk Sergei he withdrew into a solitary place and built himself a cell in the forest beyond the River Yakhroma. Soon in this deep and marshy locale several disciples came to him, wanting to imitate his life. The Monk Sergei visited him and advised him to build a monastery and church. The Monk Methodii himself toiled at the construction of the church and the cells, "on foot carrying" ("pesh nosya") wood along the river, and the monastery from that time began to be called "the Peshnozh".
In 1391 the Monk Methodii became hegumen of this monastery. At times he withdrew two versts from the monastery and here he asceticised in prayer, and here also the Monk Sergei came to him for spiritual conversation, wherefore this locale received the name "Beseda" ("Conversation-place").
The Monk Methodii was buried (+ 1392) at the monastery founded by him. In 1732 over his relics was erected a church in the name of the Monks Sergei of Radonezh and Methodii of Peshnozh. The beginning of his local celebration dates to the late XVII - early XVIII Centuries.