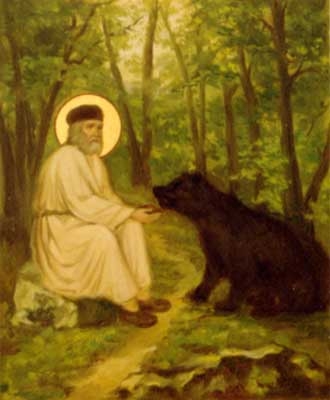 St Hellius lived and died in the fourth century. He was sent to a monastery when he was still a child. There he was raised in piety, temperance and chastity.

When he grew up, he went into the Egyptian desert, where through his ascetical struggles he attained great proficiency in the spiritual life. He was endowed with the gift of clairvoyance, and he knew all the thoughts and disposition of the monks conversing with him.

Great faith, simplicity of soul and deep humility allowed St Hellius to command wild animals. Once, the saint became tired while carrying a heavy load to the monastery. He prayed and called a wild donkey to carry his burden. The donkey meekly carried the load to the place and was set free to return to the wilderness. Another time, when St Hellius needed to cross a river and there was no boat, he summoned a crocodile from the water and crossed to the opposite shore while standing on its back.

One of the young novices of the monastery, whom St Hellius visited, asked him to take him along into the far desert. St Hellius warned him about the great work, exploits and temptations which inevitably beset all the hermits, but since the novice continued fervently to ask, he took him along. On the first night the novice, frightened by terrible visions, ran to St Hellius. The monk comforted and calmed him down and ordered him to return. Tracing the Sign of the Cross over the cave, the monk told the young hermit not to fear, because he would not be disturbed by these apparitions any more. Trusting the word of the saint, the novice decided to remain in solitude and afterwards attained such perfection that he, like his teacher Hellius, received food from an angel.