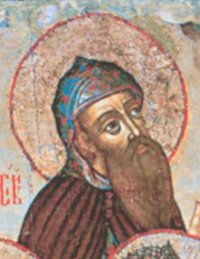 The Monk Kassian the Greek, Wonderworker of Uglich, in the world Konstantin, was descended in lineage from the princes Mangupides. He arrived in Moscow as part of the legation to Greatprince Ivan III, together with the daughter of the Byzantine emperor, Sophia Paleologa. Having decided to devote his life to the service of God, the saint declined the offer to remain at the court of the Greatprince, and he resettled to the Rostov bishop Joasaph. When the bishop withdrew for quietude to the Pherapontov monastery, Konstantin followed him. At the monastery he led a strict ascetic life.
He accepted monasticism after a miraculous vision by night of the Monk Martinian, urging him to take monastic tonsure. After a certain while Saint Kassian left the monastery going not far off from the city of Uglich, near the confluence of the Volga and Uchma Rivers, where he founded a monastery in honour of the Uspenie (Dormition) of the Mother of God.
Reports of the monk spread widely, and "many people began to come to receive blessing and to see the wilderness habitation and converse with him". Saint Kassian accepted everyone with love, guiding them on the way to salvation "with quiet words".
The monk died in extreme old age on 2 October 1504. In the Uglich Chronicles was recorded many a miracles, happening through the prayers of the saint, and in particular, the defense by him of his monastery from Polish soldiers in the years 1609-1611.
The memory of the Monk Kassian of Uglich is celebrated also on 21 May, the day of his name-in-common ("tezoimenstvo", with the holy Emperor Constantine the Great). 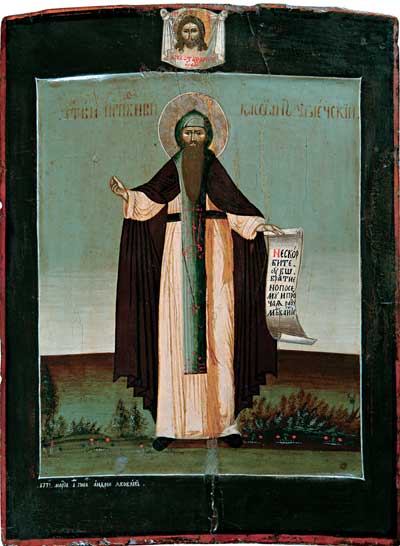