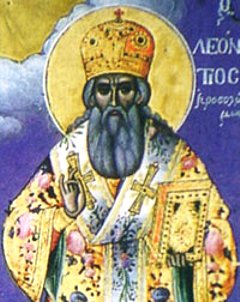 Saint Leontios, Patriarch of Jerusalem, by the account of Saint Gregory Palamas, was Patriarch during the years 1223-1261. His life was similarly described by Theodore, a monk of Constantinople. This Vita was translated in abridged form from the Greek into the Russian language. It was translated a second time more fully by the Monk Nikodemos of the Holy Mountain, who indicates the death of the Patriarch was instead actually in the year 1175.