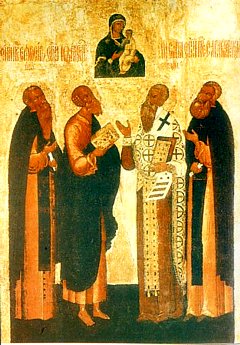 The Monk Evphrosyn of Pskov, in the world Eleazar, was born in about the year 1386 in the village of Videlebo, near Pskov, – the same village where also had been born the Monk Nikandr of Pskov (Comm. 24 September). His parents wanted that Eleazar would enter into marriage, but secretly he withdrew to the Snetogorsk monastery (on the Snyatni hill, now in Pskov itself) and there accepted tonsure.
In about the year 1425, searching to more deeply concentrate at prayer, the Monk Evphrosyn with the blessing of the monastery-head resettled in a solitary cell at the River Tolva, not far from Pskov. But concern for the salvation of neighbour impelled the monk to disrupt his wilderness dwelling, and he began to receive everyone that was in need of an experienced starets-elder and guide. The Monk Evphrosyn blessed those coming to him to live according to a skete monastic ustav-rule, compiled by him himself.
The ustav of the Monk Evphrosyn presents a rather generalised guidance for monks about the worthiness of proceeding on the monastic path – "how it becometh monks to dwell". He does not address the strict ordering of all aspects of monastic life, as did, for example, the ustav of the Monk Joseph of Volotsk; there is nothing at all in it concerning the aspects of Divine-services.
In 1447 at the request of the brethren, the Monk Evphrosyn built a church in honour of the Three Sainted-Hierarchs Basil the Great, Gregory the Theologian and John Chrysostomos – who vouchsafed him their vision, and also in honour of the Monk Onuphrios the Great (Comm. 12 July). The monastery afterwards received the name Spaso-Eleazarov. Out of humility and his love for solitary efforts, the monk did not accept the title of hegumen, but instead bestowed this upon his disciple the Monk Ignatii, and he lived in the forest near a lake.
The Monk Evphrosyn died at the advanced age of 95, on 15 May 1481. At his crypt, by order of the Novgorod archbishop Gennadii, was placed an icon-image written while yet alive by his disciple Ignatii, and included there also was the last-testament of the monk to the brethren on a shred of parchment, imprinted with the lead-seal of the Novgorod archbishop Theophil. This is one of very few last-testaments, written in their own hand by ascetics.
The Monk Evphrosyn, the originator of Pskov wilderness-life, schooled many famed disciples, who likewise created monasteries and carried the graced-seeds of ascetic life throughout all the Pskov lands. Among the disciples of the Monk Evphrosyn – were the skete starets-elders – the Monk Savva of Krypetsk (the account about him is located under 28 August); the Monk Dosiphei of Verkhneostrov (+ 8 October); the Monk Onuphrii of Mal'sk (+ 12 June); the Monk Joachim of Opochsk (+ 9 September); the Monk Ilarion of Gdovsk (+ 21 October); the Monk Khariton of Kudinsk – founder and hegumen of a monastery at Lake Kudina alongside Toroptsa (XVI); and the locally venerated brothers by birth from Pskov Ignatii, Kharalampii and Pamphil, buried at the Spaso-Eleazarov monastery. 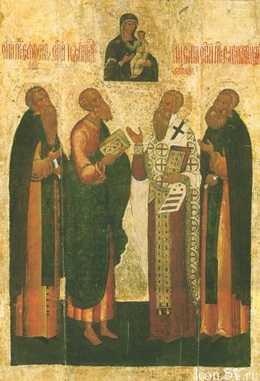