Uncovering of the relics (1815) of Venerable Nilus the Myrrh-gusher of Mt. Athos 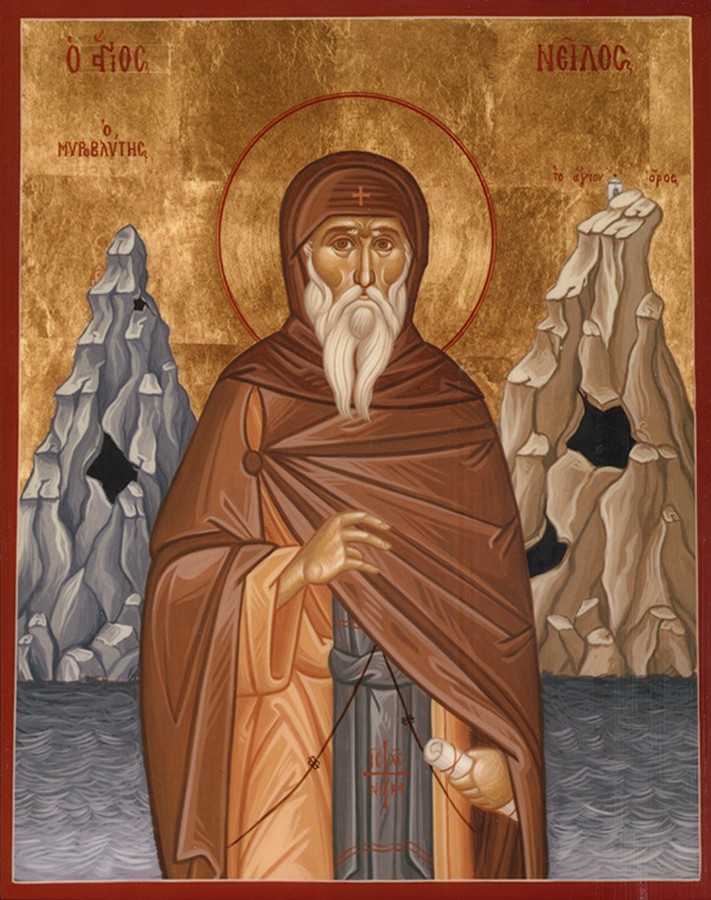 Today we commemorate the uncovering of the relics of St Nilus in 1815.

On his deathbed, St Nilus told his disciples to bury his body in a small cave beneath the cave where he lived, sternly forbidding anyone to disturb his body. Although the saint did not seek human glory during his life or after his death, the Lord glorified him in the following way. From his grave, a fragrant myrrh began to flow through a small opening in the cave and down the side of the cliff into the sea. Soon this miracle became widely known, and ships would come to collect the myrrh. The myrrh had curative properties, and many people were healed of their illnesses.

Once, two monks came to the cave and tried to find the relics of St Nilus. While they were digging, a large rock fell from above, crushing the foot of one monk. Unable to help his companion, the other monk went to get a mule and someone to help him carry the injured brother from that place.

As he lay there in agony, the monk saw St Nilus before him. He asked the monk what was the matter. The monk explained what they intended to do and how he had been injured. The saint said, “How dare you, poor man, attempt something so dangerous without the saint’s express wish? Take care in future that you do not attempt a task beyond your ability, and without the will of God.”

St Nilus touched the monk’s leg, and he was made well. With great joy he started back to his cell. On the way, he met his companion who was leading a mule. The monk who was healed told the other how he had been healed by St Nilus. Then they both glorified God and St Nilus. After this, no one dared to disturb the saint’s relics.

In 1815, a certain monk called “Prisoner” was troubled by a demon, and he also had a hernia. St Nilus appeared to him several times and healed him. The saint predicted the Greek Revolution (1821), and many dangers which the Holy Mountain would face from the Turks. Then St Nilus told him he wanted a path made to his cave so that monks could go there to pray. He also wanted the Liturgy to be served in the cave church he himself had built.

When the Fathers heard this, they wished to build a new church in honor of St Nilus. As they were digging the foundation, they found the saint’s grave. From his relics an ineffable fragrance came forth. This took place on May 7, 1815.

Then the monks informed the Fathers of the Great Lavra of their discovery. They came and transferred the relics to the Lavra, leaving only a portion of the saint’s jaw at the cave to be venerated by those who came there.

See November 12 for the Life of St Nilus.