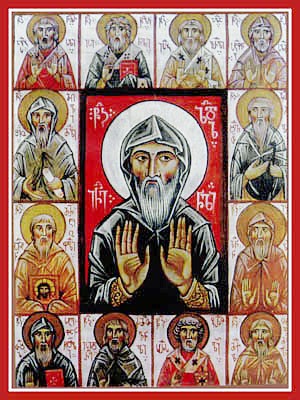 Monk John Zedazeni and his Twelve Disciples: Habib, Bishop of Nekress, Anthony of Martkob, David of Garej, Xeno of Ikalto, Thaddeus of Stepantsmind, Ise Bishop of Tsilkan, Joseph Bishop of Alaverdi, Isidor of Samtavi, Michael of Ulumbi, Pyrrhos of Breti, Stephen of Khyri, Shio of Mgvim – were holy Syrian (Cappadocian) ascetics, the founders of Gruzian-Georgian monasticism, having arrived in Gruzia from Cappadocia in the mid-VI Century. The holy Thirteen Cappadocian Fathers were actually Gruzinians, who received their spiritual schooling at the reknown Laura of Saint Simeon the Pillar-Dweller and at other monasteries of Syria and Mesopotamia, with the intent to return to their native land and assist in its Christian enlightenment.

Saint John Zedazeni, the head of these ascetics, received his spiritual schooling at Antioch. Accounts have not been preserved about the place of his birth nor about his kin. In his youthful years he accepted monasticism and devoted himself to a solitary ascetic life, gaining afterwards an amazing geniality, humility and gift of wonderworking. The fame of his spiritual exploits attracted to him a throng of disciples, from which number Saint John Zedazeni chose by lot 12 men, and in fulfilling the command of the Mother of God, he set off with them to Gruzia. Along the way they received blessing from Saint Simeon the Younger Pillar-Dweller (+ 596), and at Mtsketia, the ancient capital of Gruzia, traversing "with undampened feet" the River Kura, they were joyfully met by the people, by the emperor Parsman (542-557), and by the Archbishop-Katholikos Eulabios (552-560). The chronicles relate, that the holy Cappadocian Fathers spoke in the Gruzian language to those meeting them, and going into the Svetitskhoveli cathedral church and prostrating themselves beneathe the Life-Creating Pillar (the hagiographic account about it is located under 1 October), they glorified and gave thanks to God. With the blessing of Katholikos Eulabios, Saint John together with his disciples settled on Mount Zedazeni (from which Saint John gets his name – Zedazeni), where formerly there had been a pagan-temple and an idol erected. The ascetics lived in lean-to huts, they ate grasses and roots, and they were constantly at prayer and spiritual meditation. A multitude of the sick flocked to them, receiving healing through their prayerful intercession. After the choosing of Saints Habib and Ise as bishops, the Mother of God appeared to Saint John in a dream and commanded him to send out his disciples into various parts of Gruzia, for the preaching of the Word of God and for pastoral edification. Hearkening to the instructions of Saint John, certain of the disciples set off to Kakhetia (Xeno, and later Stephen), others to Kartalin (Pyrrhos, Michael, Thaddeus and Isidor). The accounts about the other saints – Habib, Anthony, David, Ise, Joseph, Shio – are located respectively under: 29 November, 19 January, 2 December, 15 September, 9 May.
"They all... taught the nation, they instructed it in the faith, they abolished the darkness of superstition and they did away with what remained in the mountain gorges of pagan temples and idol-worship, in place of which they erected the holy cross and holy churches, and they established within the nation a civil sense..."
Saint Xeno, "a pillar of sweet obedience", while completing his preaching in the mountains of Upper Kakhetia, founded a monastery at Ikalto, whereat also after great efforts he was buried in the cathedral church in honour of the Image of the Saviour Not‑Wrought-by-Hand.
Saint Thaddeus (in Gruzinian "Tate") at first remained at Mtsketia, organising at the bidding of Saint John the monastery at the foot of Mount Zedazeni, for instructing those that had come. After the death of Saint John, Saint Thaddeus preached in Kartalin, where he founded many churches, among which was a temple in honour of the holy First-Martyr Stephen in the city of Urbnisi. Later on he settled in a cave on Mount Tslevi near the city of Kaspi, at which summit he likewise founded a church in honour of the holy First-Martyr Stephen. In this cave at the church which he founded, there were buried the relics of Saint Thaddeus, "an image of pure truth and faith".
Saint Isidor, "a vineyard of virtues", after his prolonged apostolic exploits, established a monastery at Samtavisi in honour of the Image of the Saviour Not-Wrought-by-Hand, and here also rest his relics.
Saint Michael toiled much in the furthering of Christianity in the mountains of Upper Kartalin and Osetia. In the vicinity of Ulumbi he founded a large monastery. In the cathedral church of this monastery, which in the XIX Century was converted into a parish church, rest his holy relics.
Saint Pyrrhos, "a Divine image of tears", founded a monastery on the left bank of the River Dvanis-Tskhali, near the vicinity of Breti. Within a church of the monastery were placed his venerable relics.
Saint Stephen, "wedding knowledge with strength", after prolonged apostolic labours in Lower Kakhetia, founded a monastery in the vicinity of Khrysa. He was buried in the cathedral church in honour of the holy First-Martyr Stephen, on the left side of the altar at the table of oblation.
Having dispersed his disciples, Saint John Zedazeni kept with him Deacon Elias and absorbed himself in prayerful exploits.
Saint John had to withstand the snares of evil spirits, which by the Name of Christ he expelled from the outskirts of Mtsketa. Through the prayer of Saint John, on Mount Zaden flowed forth a spring of healing waters. Having received a revelation about his impending end, the Monk John summoned to him his disciples – the holy Deacon Elias and Saint Thaddeus of Stepantsmind, whom he commanded to bury him in his narrow cave on the mountain, at the place of his exploits. Having communed the Holy Mysteries, the Monk John beheld the heavens opened and the hosts of the Bodiless Powers of Heaven together with a multitude of the Saints. In spiritual rapture he gave up his righteous soul to the Lord. The end of Saint John transpired between the years 557 and 560, during the time of the Katholikos Makarios (553-569). His disciples, having forgotten his command, in an assemblage of clergy transported the body of the saint to the monastery at the foot of Mount Zaden and placed it in a special crypt.
But the earth roundabouts quaked and the tremours did not cease until the body of Saint John was placed in the cave atop the mountain, as the monk had commanded. During the X Century under Katholikos-archbishop Clement (908-923), on the south side of this cave was built a church in honour of John the Baptist, such that the holy relics of Saint John Zedazeni were in its chapel in the offertory. They were glorified by many signs of the mercy of the Lord.