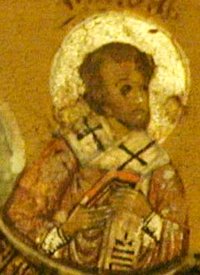 Sainted Simon, Bishop of Vladimir and Suzdal', was an author of the Lives of the Kievo-Pechersk monastic fathers, and he became a monk at the Pechersk monastery, sometime in the second half of the XII Century. In the year 1206 he was appointed hegumen of the Vladimir Nativity of the Mother of God monastery, and in 1214, at the wish of prince Georgii Vsevolodovich (+ 1238), he was made the first bishop of Vladimir-on-the-Klyazma and Suzdal'. In 1218 a church was consecrated by him at the Nativity monastery, and in the year 1225 – a cathedral church at Suzdal'. The greatprince deeply respected Saint Simon and was prepared to open up a new bishop's cathedra-chair at Suzdal' for his friend, – the monk Polykarp of the Kievo-Pechersk monastery, who sought after spiritual vain-glory. But Sainted Simon, seeing into the spiritual condition of Polykarp, talked the greatprince out of his intent, and to Polykarp himself he wrote a deeply moving missive, in which he proffered his friend guidance against his defects of soul. The epistle of Simon was placed at the beginning of the Kievo-Pechersk Paterikon and presented the author under his name as a man of learning. On the eve of his repose in the year 1226, the saint took on the schema. Initially his body was buried at Vladimir, but later on, in accord with the last wishes of the saint himself, his body was transferred after several years to the Kievo-Pechersk Lavra, where it rests in the Antoniev Caves.