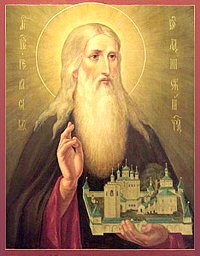 The Monk Gerasim of Boldinsk, in the world Grigorii, was born in 1490 at Pereslavl'-Zalessk. In early childhood he frequented the church of God. Having learned about the holy life of the Monk Daniel of Pereyaslavl', the 13 year old Grigorii with tears besought the starets-elder to let him join him. The starets accepted the boy as a novice and in a short while gave him monastic tonsure with the name Gerasim. The newly-made monk zealously fulfilled the deeds of fasting and prayer, and soon he was known about in Moscow as a strict ascetic. He was summoned to the capital together with his teacher, where he met the tsar. Worldly fame was a burden for the ascetic and, after his 26 year stay under the guidance of the Monk Daniel, Saint Gerasim, having received the blessing of his starets for hermitage life, settled not far from the city of Dorogobuzha in the Smolensk lands, in a wild forest, inhabited by snakes and wild animals. The saint many a time was subjected to the intrusion of brigands, but meekly and patiently he bore all their outrages and he prayed for these malefactors. Through a particular vision, he then went over to Mount Boldina, where at a water-spring there stood an immense oak. The local inhabitants beat him with canes and wanted to drown him, but having taken fright, they handed him over to the Dorogobuzha administrator, who threw him into jail for vagrancy. The Monk Gerasim patiently endured the ridicule, he kept quiet and he prayed. During this while there came to the administrator an imperial emissary from Moscow. Seeing Saint Gerasim, he bowed down to him and besought his blessing, since earlier before he had seen the saint together with the Monk Daniel in the presence of the tsar. The administrator became terrified, and immediately he begged forgiveness of the saint and promised to make him an enclosure protecting him from incursions. From this time Saint Gerasim began accepting to himself those with a desire for monastic deeds, and having sought at Moscow the permission to build a monastery, in 1530 he raised up a church in the Name of the MostHoly Trinity and he built cells for the gathered brethren. Besides the Boldina monastery, the Monk Gerasim founded yet another monastery in honour of Saint John the Forerunner at the city of Vyaz'ma, and later on in the Bryansk forest at the River Zhizdra, a monastery in honour of the Vvedenie-Entry into the Temple of the MostHoly Mother of God. The disciple of the Monk Gerasim, Peter Korostelev, was made hegumen of this monastery. Under the spiritual guidance of the Monk Gerasim were formed strict ascetics: the Hegumen Antonii – afterwards Sainted-hierarch of Vologda, and Arkadii, a disciple of the monk, asceticising as an hermit and buried at the Boldina monastery.
Before his death, the Monk Gerasim summoned the hegumens and monks of the monasteries founded by him, told them about his life and gave them a final instruction. This oral narrative of the saint was included in the Vita-Life, compiled on the resolve of gathered elders by Sainted Antonii. The Monk Gerasim reposed on 1 May 1554. 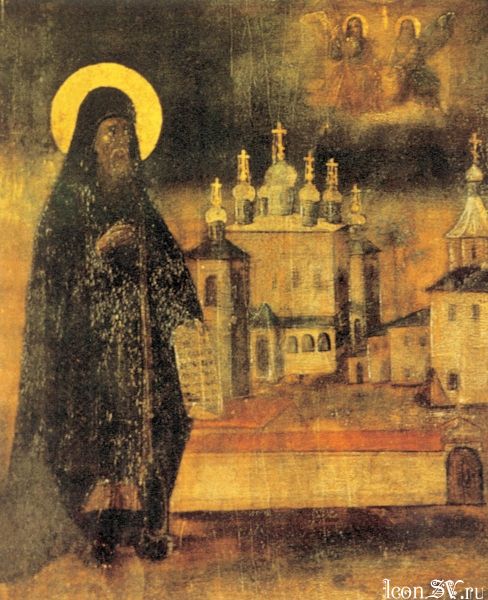