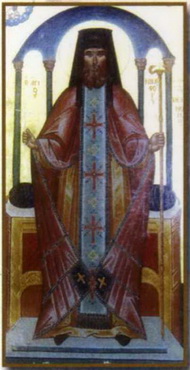 Saint Nicephorus, the “most luminous star of the Church of Christ,” who delighted the hearts of the faithful “with divinely inspired teachings,” was born around 1750 at Kardamyla on the Greek island of Chios, and his family name was Georgios, or Georgos. When he was still very young, he became sick with a pestilential disease. His parents vowed that if he recovered, they would offer him to the Mother of God to serve Her at the famous Byzantine monastery of Nea Moni, which was dedicated to Her. He did get well, and so the parents took him to the monastery, where he was placed under the guidance of the venerable Elder Anthimus Hagiopateritis.

Later, he was sent to the city of Chios to be educated in its schools by the priest Fr Gabriel Astrakaris. St Nicephorus remained close to this priest throughout the period of his education in the city, where he developed a love for learning, and a respect for those who taught others. He also met St Athanasius Parios (June 24), who was the Director of the school in the city of Chios. The greatest influence on his life was St Macarius of Corinth (April 17), whom he met even before he met St Athanasius. St Macarius was at Chios in 1780, left for a time, then returned in 1790. St Nicephorus saw St Macarius frequently, and learned much from him. After finishing his education, St Nicephorus returned to the monastery and was ordained a deacon.

When St Athanasius Parios reorganized the school of Chios, he appointed Nicephorus as one of its teachers. At the same time, he was also given a blessing to preach the Word of God at Nea Moni and elsewhere.

While serving as a teacher, St Nicephorus was called to become the Igumen of Nea Moni. Until 1802, the monks had managed the monastery’s affairs without any audits. In that year, however, the monastery was fined 600, 000 piasters, and some of the monastery’s estates had to be sold to pay the amount. Suspecting that the affairs of the monastery were not being properly administered, the citizens asked that Fr Nicephorus be made Igumen. They knew he despised worldly possessions, and so they had full confidence in him. They also decided that an audit of the monastery accounts would be made every year.

It was not easy for St Nicephorus to assume this burden, for he was not familiar with the many responsibilities of a Superior. He would have prefered solitude and study, but he applied himself to his new duties. During the next two years, he tried to resolve conflicts, and to raise the moral spirit of the monks by teaching and by personal example. There were many people above him and below him who did not appreciate his efforts, however, and they plotted against him. Unaccustomed to quarrels and intrigues, he was unable to complete his two year term in office. Therefore, he left and sought refuge in the Hermitage of St George at Resta.

Although he was unable to govern these monks, St Nicephorus did excel in his personal life, and in guiding many people to virtue. He also composed church services and hymns to various saints, including Sts Niketas, John, and Joseph (May 20), and St Matrona of Chios (October 20).

The companions of St Nicephorus at Resta were a retired priest (who had also been a teacher) called Fr Joseph, and St Macarius of Corinth. Fr Joseph had lived on Mount Athos for a while, then settled on Chios. He also composed church services, including one to the New Martyr St Nicholas the New (October 31), which had been published in Venice in 1791. In 1812, St Athanasius Parios retired as Director of the schools of Chios, and joined St Nicephorus and the others at Resta.

St Nicephorus devoted himself to spiritual struggles, study, and writing. He also engaged in physical work of an agricultural nature. He planted olive and fig trees, cypresses, and pines. He also encouraged others to plant trees, for he understood that a lack of trees led to poverty, and that by planting trees one’s material resources could be improved. The saint would sometimes tell those who came to him for Confession to plant so many trees as a penance.

In 1805, on his deathbed, St Macarius entrusted St Nicephorus with the task of completing and publishing his book THE NEW LEIMONARION. This book contained the Lives and church services of various martyrs, ascetics, and other saints. It is remarkable in that three saints collaborated on this book about saints, St Macarius, St Nicephorus, and St Athanasius Parios.

By writing so many saints’ Lives and church services, St Nicephorus showed that he considered them important and beneficial. Not only did he provide the biographical details about these saints, he also expressed the Orthodox view of God and man, the beauty of the virtues, and spiritual concepts such as theosis (divinization), inner attention, ceaseless prayer, purification, and asceticism in general.

Like St Macarius of Corinth, St Nicephorus was also known as a trainer of martyrs. Those who abandoned Christianity and embraced Islam, and later repented of their actions, went to him to confess their sin. He helped them to prepare to wash away their apostasy by shedding their blood as martyrs. Mindful of the Lord’s words, “Whoever shall deny Me before men, I will also deny him before My Father Who is in heaven” (Mt. 10:33) they believed that only after a public reaffirmation of their faith in Christ before the Moslem authorities (which inevitably resulted in a sentence of death) could their sin be forgiven.

St Nicephorus prepared them with prayer, fasting, prostrations, and by encouraging them to remain strong when they went to their deaths. Thus fortified, they endured the most horrible tortures with astonishing courage. Not only did the martyrs themselves receive grace and forgiveness from God, but their example encouraged others to remain firm in the Orthodox Faith.

In addition to those whom he perpared personally, many others were also inspired to martyrdom through his published Lives and services to the martyrs.

Although St Nicephorus had the grace of working miracles, this is not the only reason that he is venerated as a saint. His holy life and character are also important considerations. A saint is one who is free from all vice and possesses all the virtues through divine grace. The people of Chios recognized that St Nicephorus was humble, gentle, free from anger, and filled with love for others. That is why, even in his lifetime, they regarded him as a saint.

St Nicephorus was of medium height, with a pale and gentle face, and a large black beard. Although St Nicephorus probably reposed in the summer of 1821, his Feast Day is designated as May 1. He died in a home near the church of St Paraskeve, where he sometimes stayed overnight when he was unable to get back to Resta. His body was brought back to Resta, and was placed in a grave where both St Athanasius Parius and the monk Nilus had once been buried.

The holy relics of St Nicephorus were uncovered in 1845 and brought to the metropolitan church of Chios. Many years later, the Guild of Tanners asked for the relics and placed them in the church of St George. In 1907, an icon of St Nicephorus was painted, and a church service was composed in his honor. 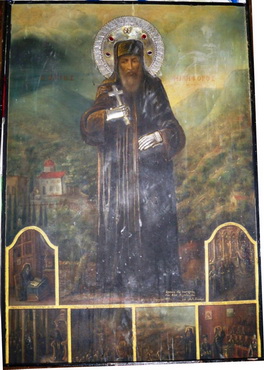