St Simeon the Bishop of Polotsk and Tver 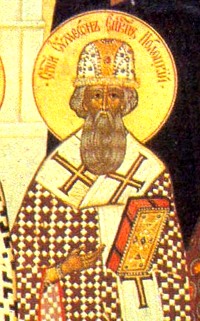 Saint Simeon, Bishop of Tver was descended from the Polotsk princes. He was the seventh bishop of Polotsk and the first bishop of the Tver diocese. The saint’s cathedra was first at Polotsk, but hostile attacks and conflicts with the Lithuanian princes, and the murder of the Polotsk prince (his relative) in 1263, compelled him to move to Tver (Prince Yaroslav Yaroslavich had become Great Prince of Russia, and he chose Tver as his ruling city).

St Simeon was well-disposed and kind to the down-trodden and destitute, attentive to the monastic and priestly orders, and a zealous defender of truth.

The Nikonov Chronicle relates that this holy bishop was “knowledgeable about medicine, and well versed in the books of Holy Scripture; he was a teacher, a virtuous man, concerned for the needy, widows and orphans, a defender of the down-trodden and deliverer of the oppressed.”

History preserves for us a conversation of St Simeon with Prince Constantine of Polotsk who, wishing to make a jest about his court, asked the saint at supper: “Where shall the courts be in that world?” Simeon answered, “Those courts shall also be where the prince is.”

The prince did not care for this, and he said, “A court might judge unjustly, and take bribes, or torture people, and is it I who do the harm?” The bishop explained to him, “If a prince is good and God-fearing, and is concerned for the people, and loves truth and he appoints good, God-fearing, intelligent and truth-loving men to his council, that prince shall be in Paradise and his court with him. If, however, a prince is without the fear of God, and is not concerned for Christians and does not think of orphans and widows, and if he appoints wicked counselors who lack integrity in order to bring him money, that prince shall be in Hell and his court with him.”