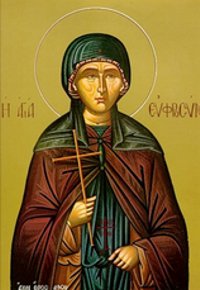 The Holy Martyr Paphnutius hailed from Egypt and struggled in the desert. During the persecution against Christians under Diocletian (284-305), the governor Hadrian commanded that St Paphnutius be brought to him. The ascetic, not waiting for those sent to bring him, appeared before the governor, confessed his faith in Christ, and was subjected to torture.

The soldiers involved in his torture, Dionysius and Callimachus, seeing how the power of God preserved the martyr, believed in Christ the Savior themselves, for which they were then beheaded. Cast into prison after the tortures, St Paphnutius converted forty prisoners to the Faith. They were all burned alive.

After a while St Paphnutius was set free, and a Christian named Nestorius gladly took him in. He and all his family, after spiritual guidance, became steadfast in the Faith, and ultimately endured martyrdom. The saint strengthened many other Christians to confess our Lord Jesus Christ, and they all died as martyrs. Some were cut with swords, others were burned. There were 546 men in all.

St Paphnutius himself was thrown by the torturers into a river with a stone about his neck, but he miraculously floated to shore with the stone. Finally, they sent the holy martyr to the emperor Diocletian himself, who commanded him to be crucified on a date tree.

Saint Euphrosyne of Alexandria was born at the beginning of the fifth century in the city of Alexandria. She was the only child in her family of illustrious and rich parents. Since her mother died early, she was raised by her father, Paphnutius, a deeply believing and pious Christian. He frequented a monastery, the igumen of which was his spiritual guide.

When Euphrosyne turned eighteen, her father wanted her to marry. He went to the monastery to his spiritual guide to receive his blessing for the planned wedding of his daughter. The igumen conversed with the daughter and gave her his blessing, but St Euphrosyne yearned for the monastic life.

She secretly accepted tonsure from a wandering monk, left her father’s house and decided to enter a monastery in order to lead her life in solitude and prayer. She feared, however, that in a women’s monastery her father would find her. Calling herself the eunuch Smaragdos, she went to the very same men’s monastery which she had visited with her father since childhood.

The monks did not recognize Euphrosyne dressed in men’s garb, and so they accepted her into the monastery. Here in a solitary cell, St Euphrosyne spent 38 years in works, fasting and prayer, and attained a high level of spiritual accomplishment.

Her father grieved over the loss of his beloved daughter and more than once, on the advice of the igumen, he conversed with the monk Smaragdos, revealing his grief and receiving spiritual comfort. Before her death, the nun Euphrosyne revealed her secret to her grieving father and asked that no one but he should prepare her body for burial. Having buried his daughter, Paphnutius distributed all his wealth to both the poor and to the monastery, and then he accepted monasticism. For ten years right up to his own death, he labored in the cell of his daughter. 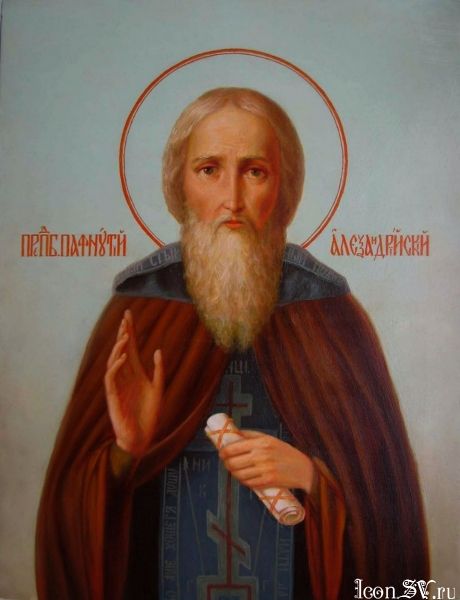