Venerable Cyril the Abbot and Wonderworker of Novoezersk, Novgorod 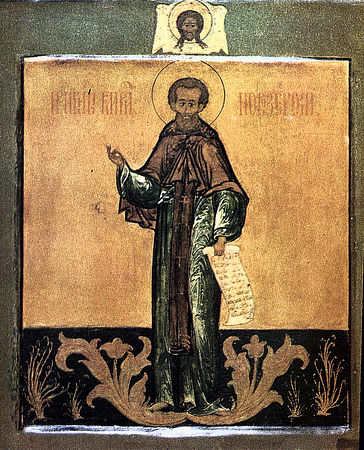 Saint Cyril of New Lake was born into a pious family. The Lord marked him as one of the chosen even before he was born. Cyril’s mother was praying in church during the Divine Liturgy, and the infant in her womb cried out, “Holy, Holy, Holy, Lord of Sabaoth!”

From the time of his childhood the saint was fond of solitude and prayer, and he dreamt of monastic life. At fifteen years of age Cyril secretly left his parental home, intending to enter the Pskov Caves monastery. He did not know the way to the monastery, and took nothing from home for the journey. He went his way, putting all his trust in the Lord and His All-Pure Mother. Twenty versts from the city the youth met a magnificent monastic Elder, who led him to the monastery. As he left, he blessed him with the words, “May God bless you, my child, and grant you the angelic schema, and may you be a chosen vessel of the Divine Spirit.” Having said this, the Elder became invisible. The boy realized that this had been a messenger from God, and he gave thanks to the Lord.

The igumen St Cornelius (February 20) saw with his clairvoyant eye the grace manifest in the young man. He provided him with much guidance and tonsured him into the monastic schema with the name Cyril. The fifteen-year-old monk astonished the brethren with his efforts. He emaciated the flesh through fasting and prayer, and zealously fulfilled obediences. Day and night he was ready to study the Word of God. Even then he thought to end his days in solitude in the wilderness.

The boy’s parents mourned him as one dead, but once an Elder of the monastery of St Cornelius came to them and told them about their son and his life at the monastery. The joyful news confirmed in Cyril’s mother her love for God. She spoke with her husband about leaving to the monastery her portion of the inheritance, then left the world and became a nun with the name Elena (Helen). She died in peace a short time later.

The saint’s father came to the monastery, and Igumen Cornelius told Cyril to meet with him. The saint was troubled, but not daring to disobey the igumen, he fell down at his father’s feet, imploring forgiveness for secretly leaving home. The father forgave his son, and he himself remained at the monastery. St Cornelius tonsured him into monasticism with the name Barsanuphius, and gave him to his son for instruction.

Three years later, he peacefully fell asleep in the Lord. His son continued to toil more fervently for the Lord, disdaining his own will, and in was obedient not only to the igumen, but also to the brethren. He thirsted to go about all the Russian land, venerating its holy shrines and to find for himself a wilderness place for a life of silence.

With the blessing of St Cornelius, St Cyril left the monastery in which he had grown strong spiritually, and he went to the coastal regions, roaming through the forests and the wild places, eating tree roots and berries. The saint spent about twenty years in this difficult exploit of wanderer, and he went to the outskirts of Moscow, Novgorod and Pskov, but he never entered any house nor did he accept alms. He wandered about during the day, and spent his nights at prayer on church porches, and he attended the church services.

Once while at prayer, St Cyril saw a heavenly light indicating the direction where he should found a monastery. He set off on his way at once, and having reached the Tikhvin monastery, he spent three days and three nights there in ceaseless prayer to the Most Holy Theotokos. The Mother of God appeared to him in a dream. Showing Her approval of him, She said, “My servant Cyril, pleaser of the Most Holy Trinity, go to the Eastern region of White Lake, and the Lord My Son will show you the place of rest for your old age.”

The saint proceeded to White Lake, weeping copious tears at the miraculous vision. On the lake he saw a small island, from which a pillar of fire rose up to the sky. There, beneath a centuries old spruce tree, St Cyril built a hut, and then set up two cells: one for himself, the other for future brethren. The hermit also constructed two small churches, one in honor of the Resurrection of Christ and the other in honor of the Mother of God Hodigitria. He underwent many temptations from invisible enemies, and from idlers roving about, but he overcame everything by brave endurance and constant prayer. News of his holy life spread everywhere, and brethren gathered around him.

There were many instances of healing through his prayers, and the Lord also granted His saint the gift of foresight. Sensing his impending end, St Cyril summoned the brethren. With tears of humility the saint instructed his spiritual children one last time, until his voice gave out. For a long time then he was silent, but suddenly he cried out with loud sobbing, “I go to the Lord into life eternal, but I entrust you to God the Word and His Grace, bestowing an inheritance and sanctification upon all. May it help you. But I beseech you, do not become lax in fasting and prayers, guard yourself from the snares of the Enemy, and the Lord in His ineffable mercy will not condemn your humility.”

Having said this, the saint gave a final kiss to the brethren, received the Holy Mysteries, signed himself with the Sign of the Cross, and with the words “Glory to God for everything!” he gave up his pure soul to the Lord on February 4, 1532. 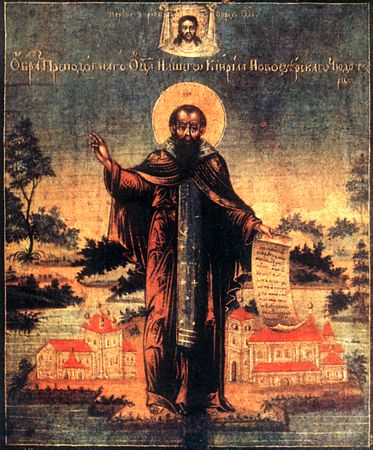 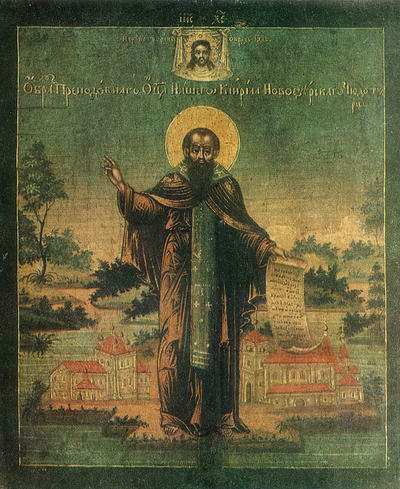