Our Holy Father George the Georgian 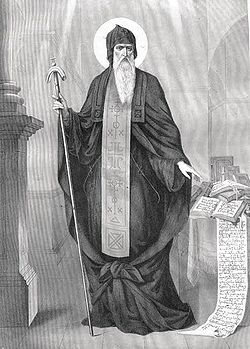 Born in Iberia or Georgia in 1014, he was a kinsman of the Georgian king, Bagrat. He received a good classical education in his early years, but his heart ever drew him towards the spiritual life. He laboured in asceticism under the renowned spiritual teacher George on the Black Mountain. He then went off to the Holy Mountain and continued his asceticism in the monastery of Iviron, becoming the abbot of that monastery. With the assistance of the Byzantine Emperor, Constantine Monomachus, he restored Iviron and roofed the church with lead. This same leaden roof remains to this day. He translated the Holy Scriptures, the Prologue and the books for Divine Service into Georgian. Bagrat summoned him back to Georgia to teach the people, and he received a royal welcome in his homeland. He travelled far and wide, instructing the clergy and the people. Reaching old age, he desired to depart this life on the Holy Mountain and set out on the road, but death overtook him in Constantinople in 1067. His relics were taken to Iviron. Although he died on May 24th, the Georgians celebrate his memory on June 30th, counting him as equal to the apostles.