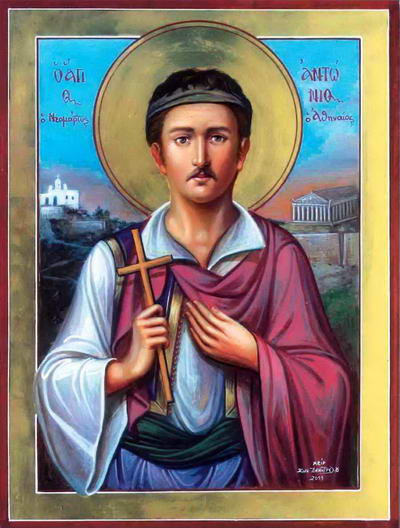 Saint Antony was the son of poor Christians from Athens. In order to help his parents, he entered the service of an Albanian Muslim at the age of twelve. In 1770, during the repression which followed the Greek rising in the Peloponnese, his masters sold him to some Turks, who tried in vain to convert him. He was then sold to a succession of five harsh, fanatical masters, but he remained unshaken in the Faith, and was bought at last by a Christian coppersmith in Constantinople. Having been warned one night in a dream that he would receive God's help to obtain the glory of martyrdom, he was recognized next day in the street by one of his former masters, who began shouting to the passers-by that the young Christian was his runaway slave and an apostate from Islam. Antony was dragged to the court amid much commotion. He confessed that he was willing to die a thousand deaths for the love of Christ. "You would become a Christian more easily than you could make me deny my Christ," he told the judge. Unable to persuade the Saint to feign conversion in order to save his life and under pressure from false witnesses, the judge reluctantly committed him to prison. Antony consoled the other Christian prisoners, gave away what little money he had to the poor, and wrote to thank his master for all his kindnesses and through him asked the forgiveness of all Christians and besought the prayers of the Church.
'As the vizir delayed passing sentence, the Saint's accusers made a complaint to the Sultan Abdul Hamid who, fearing a breach of the peace, ordered his immediate execution. The valiant sixteen-year-old went joyfully to the place of martyrdom. He offered his neck to the executioner, who struck him lightly three times to see if the pain would make him yield. Then, finding that he remained steady, he cut his throat like a slaughtered lamb 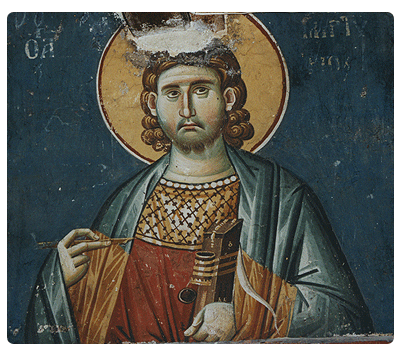