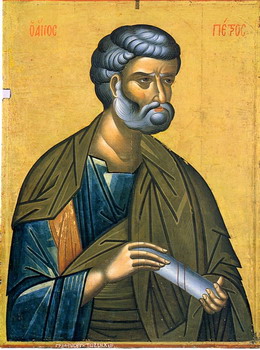 First-enthroned of the apostles,
teachers of the universe:
Entreat the Master of all
to grant peace to the world,
and to our souls great mercy!

O Lord, You have taken up to eternal rest
and to the enjoyment of Your blessings
the two divinely-inspired preachers, the leaders of the Apostles,
for You have accepted their labors and deaths as a sweet-smelling sacrifice,
for You alone know what lies in the hearts of men.

Today Christ the Rock glorifies with highest honor
The rock of Faith and leader of the Apostles,
Together with Paul and the company of the twelve,
Whose memory we celebrate with eagerness of faith,
Giving glory to the one who gave glory to them!