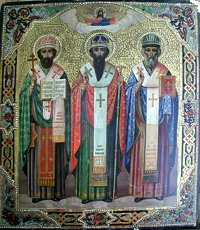 Sainted-Hierarchs Gerasim, Pitirim, Jona were bishops of Great Perm and Ustiug. Saint Gerasim – was the third bishop of the Zyryan people, and a worthy successor of Saint Stefan (Stephen), Enlightener of Perm. He was elevated to the Perm cathedra-seat sometime after the year 1416, when only part of the Zyryani had been converted to Christianity. He was zealously concerned over his flock, which suffered incessant incursions from the Novgorodians and pagan Vogulians. He boldly went into the Vogul camps, urging them to cease plundering the defenseless Perm Christians. During the time of one of these journeys he died a martyr's death: he was murdered (according to tradition – strangled with his omophor) by his Vogul servant in 1441. He was buried in the Annunciation church of the village of Ust'-Vym' not far from the city of Yarensk, at the River Vychegda (also Comm. 24 January).
The successor of Saint Gerasim was his disciple, the archimandrite Pitirim. Even during his time the Voguli had not ceased attacking the peaceful Zyryani, the settlers of the Permian land. Bishop Pitirim, just like his predecessor, stood forth for his flock. In 1447 at Moscow he personally appealed to the great-prince about rendering aid to the Zyryani. The saint often visited among his flock, which was spread out over a wide territory, instructing them in the Word of God and coming in help over their misfortunes. And to enlighten the pagan Voguli he undertook far-flung journeys, during the time of which his life was frequently in danger, and wherein he had to endure all sorts of privation. But the saint did not slacken his efforts, he enlightened and instructed people in the homes, in the churches, and in the open places.
By his preaching he converted to Christianity many of the Voguli, who lived along the tributaries of the River Pechora. By this he roused the terrible wrath of the head leader of the Voguli, named Asyk, who murdered the saint in a field during the time of his making a molieben. This occurred not far from Ust'-Vym' on 19 August 1455. Saint Pitirim compiled the vita (life) of Sainted Alexei and the canon of the uncovering of his relics.
After Saint Pitirim, Saint Jona came upon the Perm cathedra-seat. He converted to Christianity the remaining part of Great Perm, i.e. the pagan tribes living along the Rivers Vishera, Kama, Chusova and others. By his efforts the idols were eradicated and in their place was erected churches, nearby which the saint opened schools. Experienced pastors were transferred to the newly-converted at Ust'-Vym', who preached and taught at these schools.
Saint Jona reposed on 6 June 1470. His relics rest together with the relics of Saints Gerasim and Pitirim in the Annunciation temple in Ust'-Vym' (in Vologda district).
The commemoration in common of these three saints acknowledges their apostolic activity in this Eastern expanse of Russia.