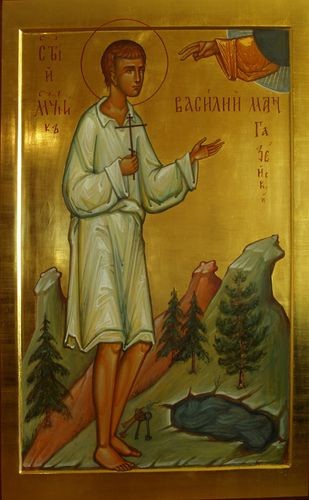 The Holy Martyr Vasilii (Basil), Mangazeia Wonderworker, – was the first saint glorified in the Siberian land. He accepted a martyr's death on 4 April 1600, and from the mid-XVII Century he is deeply venerated for manifold manifestations of grace in help of infirmities, in sorrow and in desperate straits.
Blessed Vasilii was the son of a not-rich inhabitant of Yaroslavl', Feodor by name, and was taken by a certain rich Yaroslavl' merchant to a place for the selling of his wares in sub-polar Mangazeia – one of the first Russian cities in Siberia.
Vasilii strictly fulfilled the Christian commandments. From his early years his integrity was obvious to all. Meekness and humility were his finery, and his heart was filled with faith in God and by piety. Love for prayer impelled him during time of Divine-services to leave off with mundane concerns and to go to the holy church.
The devout youth just barely turned age 19, when the All-Supreme, "looking out for his virtue, did intend to summon him to eternal blessedness, the which to attain from this temporal life is impossible otherwise, than by the narrow and afflicted path of an external testing".
As the Church tradition testifies, one time, when Blessed Vasilii was at prayer in church during the Paschal matins, thieves plundered the wares of his master. An explanation was demanded of Vasilii. Despite the many shouts of his master, Righteous Vasilii remained in church until the end of the Divine-services. His money-loving master, at the instigation of the devil, suspected Vasilii of being an accomplice in the crime and upon his return from the church he was subjected to insults and beatings. The guiltless youth answered his tormentor: "I have in truth taken none of thine goods". Then the master led Vasilii off to the city military-commander, who subjected the sufferer to new cruel torments. The merchant, enraged at the patient silence of Vasilii, in anger struck him with a ring of ware-house keys, and from this blow Blessed Vasilii died.
The body of the innocent martyr was put in a grave and without Christian burial was committed to the earth, "where it is duly moist from water". But the All-Mighty Lord after the passage of 47 years willed for it to appear from the bosom of the earth and to be glorified by many miracles.
Saint Vasilii many a time helped lost and danger-threatened travelers and fur-hunters; he healed palsy, blindness, and various other maladies; through the prayers of mothers he healed children, and preserved the despondent from suicide. There have been preserved copies of the Life of Saint Vasilii (XVII-XIX Cent.) that testify about the abundant manifestations of grace through prayers to the Mangazeia wonderworker.
In 1659 with the blessing of the Tobolsk metropolitan, Simeon, there was made an inspection of the relics of the saint, and from that time there began to spread veneration of him as one truly God-pleasing. In 1670 with the construction of the Turokhansk monastery of the Holy Trinity, priestmonk Tikhon transferred the relics of Righteous Vasilii into the monastery founded by him. In 1719 this monastery was visited by the great Siberian missionary – the Tobolsk metropolitan, Philothei (Leschinsky), and he venerated the relics of the saint and compiled a canon to him. Towards the end of the first third of the XVIII Century there were compiled three services and several discourses on the day of memory of Righteous Vasilii.
The veneration of the God-pleasing saint contributed not a little to the conversion from paganism to Orthodoxy of the Tungus, Evenki and Yurak peoples. The peoples of the North turn to Saint Vasilii as a patron saint for the fur-hunter tradesmen.
One of the first icons of Saint Vasilii was written by a novice of the Tobolsk metropolitan Pavel – the painter Luke, on the occasion of his miraculous deliverance from death. On the holy icons Saint Vasilii is depicted "with a boyish face, and small of stature", "in image of reverence, eyes having a sparkle, gazing intently, and the hair of his head dark blond". On several of the icons of the saint the Trinity Turukhansk monastery is depicted, and over it on a mount is Vasilii praying – in but a shirt and without footwear. Sometimes also on the icons was depicted the suffering of the saint at the hands of the merchant and military-commander. Depictions of Saint Vasilii of Mangazeia are known of at the Vladimir cathedral in Kiev, at Novgorod, and at Moscow.
One of the first days of memory of the saint was on 22 March, when Holy Church remembers a saint of same name with him – the PriestMartyr Basil of Ancyra. Afterwards, at the Turukhansk Trinity monastery his memory began to be celebrated on 10 May, in honour of remembrance of the transfer of his relics from Mangazeia to Turukhan. An earlier commemoration of Righteous Vasilii of Manganzeia was done under 6 June, on the day of appearance of his relics. 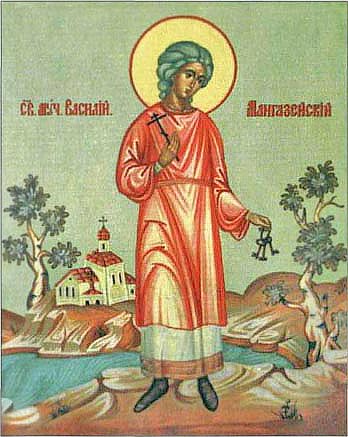