Our Holy Father Thomas of Malea 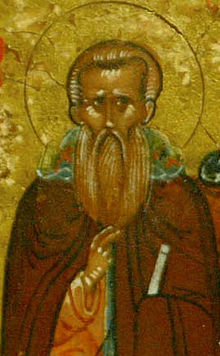 Saint Thomas of Mt. Maleon was a military commander before he became a monk. Strong and brave, he had participated in many battles, and brought victory to his countrymen, for which he gained glory and esteem. But, striving with all his heart towards God, Thomas abandoned the world and its honors, and he took monastic vows.

With great humility he visited monastic Elders, asking for guidance in the spiritual life. After several years Thomas received the blessing for solitary wilderness life and, led by a pillar of fire at night by the holy Prophet Elias, he settled on Mount Maleon (on the eastern part of Athos). Dwelling in complete seclusion, St Thomas fought with invisible enemies with as much courage as he had displayed against the visible enemies of his country.

The life and deeds of St Thomas could not be concealed from the surrounding area. People began to flock to him seeking spiritual guidance, and even those suffering from sickness, since he received from God the blessing to heal infirmities.

Many believers received help through the prayers of the holy monk. Even after his death, he does not cease to heal those who seek his aid, from every passion and sickness.

O God of our Fathers,
always act with kindness towards us;
take not Your mercy from us,
but guide our lives in peace
through the prayers of Saints Thomas and Acacius.

Podoben: "As You were voluntarily raised..."
Inflamed with divine love, you courageously showed us a great victory:
you spurned the mortal king and all earthly beauty.
You completed your worldly sojourn on Mount Maleon,
from where you went up to Heaven to the King of kings.
Unceasingly pray for us all, O Thomas.