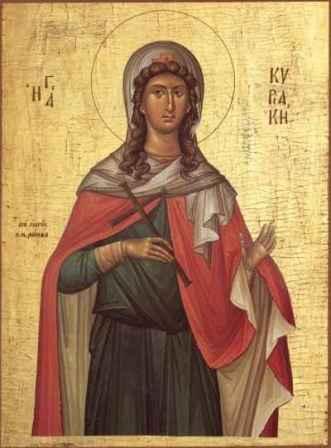 In the time of the Emperors Diocletian and his son-in-law Maximian, both adversaries of Christ, there lived in Anatolia two elderly, devout souls, Dorotheus and Eusebia. They were devoted Christians, rich but childless. With unceasing prayer, they besought God for a child, and their prayers were answered in this holy Dominica. She consecrated herself to God from her childhood, holding herself apart from the activities of carefree children. When she had grown up, beautiful in body and soul, she had many suitors but refused them all, saying that she had betrothed herself to Christ the Lord and desired nothing other than to die a virgin. One of these rejected suitors denounced Dominica and her parents to the Emperor Diocletian as Christians. The Emperor ordered that her parents be tortured, and after torture had them exiled to the town of Melitene, where they died under further torture. Diocletian sent Dominica to Maximian for trial. When she affirmed her faith in Christ the Lord before Maximian, he ordered that she be thrown to the ground and flogged with bull-whips. Then the Emperor handed her over to the generals - firstly to Hilarion and then, after his death, to Apollonius. They tortured her bestially in all possible ways, but in vain. While holy Dominica lay in prison wounded all over, Christ the Lord appeared to her, healed her and said to her: "Don"t be afraid of the torture, Dominica; My grace is with thee." And indeed Christ"s grace saved this martyr from fire and from wild beasts, which the godless torturers were certain would bring about her death. Seeing the miraculous saving of Dominica from such a death, many of the pagans came to belief in Christ. All were beheaded. Dominica said to Apollonius: "There is no way that you can turn me from my faith. Throw me into the fire - I have the example of the Three Children; throw me to the wild beasts - I have the example of Daniel; throw me into the sea - I have the example of Jonah the prophet; put me to the sword - I shall remember the honoured Forerunner. For me, to die is life in Christ." Then Apollonius ordered that she be beheaded. Dominica knelt and raised her hands to eaven in prayer to God, that He would have mercy on and save all those who would celebrate her memory, and that he would give rest to her soul and those of her parents. Finishing her prayer, she gave her soul to God before the sword descended on her head. She suffered with honour in Nicomedia and went to eternal joy in the year 289.