Holy martyrs Claudius the Tribune, his wife Hilaria and their sons Jason and Maurus 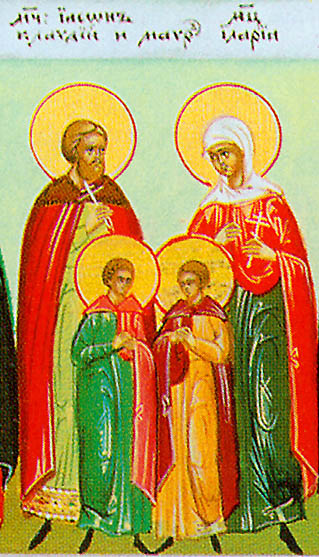 The Holy Martyrs Claudius the Tribune, his wife Hilaria and their sons Jason and Maurus, and Diodorus the Presbyter and Marianus the Deacon suffered with Sts Chrysanthus and Daria.

The tribune Claudius himself came to believe in Christ and accepted holy Baptism together with his wife Hilaria, their sons Jason and Maurus, and all his household and soldiers. When news of this reached the emperor Numerian (283-284), he commanded them all to be executed. St Claudius was drowned in the sea, and his sons and soldiers were beheaded. Christians buried the bodies of the holy martyrs in a nearby cave, and St Hilaria constantly went there to pray. Once, they followed her and led her off to be tortured. The saint asked that they give her a few moments to pray, and as soon as she finished, she gave up her soul to God. A servant buried the saint in the cave beside her sons.