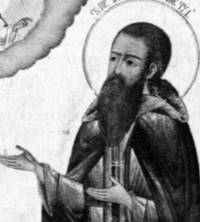 The Monk Lazar of Murmansk was a Greek by nationality, born at Constantinople. In his native city he accepted monasticism at the High-Mount monastery under the elder (starets) Athanasias Diskotes – builder of many a monastery. Eight years later the monk was situated under the guidance of the Caesarea Bishop Basil. In the year 1343 Bishop Basil, wanting to encourage the Russian Church with spiritual blessing, sent the Monk Lazar as a noted iconographer together with monks and gifts to the Novgorod Sainted-hierarch Vasilii (Basil) (Comm. 10 February, 4 October, 3 June).The Monk Lazar was obliged to make for the Caesarea diocese a copy from the great Novgorod sacred-item – the Icon of Sophia, the Wisdom of God (Comm. 15 August), and to compile an account of Novgorod churches and monasteries. Meeting the monk, the Novgorod hierarch bowed to the ground to his guest and blessed him to remain in a monastery built by him. For ten years the Monk Lazar faithfully served Saint Vasilii, and in 1352 upon the death of the holy arch-pastor, he "by his own hands dressed the holy body in the prepared clothing and shed many tears".
Grieved by this, that he was deprived of both his guides (about the death of the Caesarea bishop the monk had learned of earlier through letters), the Monk Lazar considered returning to his native land, but soon in a dream the Novgorod sainted-hierarch appeared to him and directed him "to go northwards towards the sea, to Mucha Island in Lake Onega" (Murmansk Island in Lake Onega), and in a short while his first guide – the bishop of Caesarea, commanded him in a dream to go to that same place and found a monastery. From the chronicles is known, that at this time the Novgorodians were undertaking their first attempts to convert to the Christian faith the peoples inhabiting the White Sea coastal region.
But Saint Lazar was not able to get to this island at once – the controller of the island, the Novgorod merchant Ivan, for a long time would not permit him. The monk prayed fervently to the MostHoly Mother of God and to Saint John the Forerunner and he wept at the grave of Sainted Vasilii. And the resistance of the land-controller was removed: Sainted Vasilii himself once appeared to him in a "dream visage" and ordered him to bestow the island "to our friend Lazar", so as there "to extol the name of the Mother of God".
Saint Lazar arrived alone at the blessed spot. He set up a cross, an hut, and "a small temple" – a chapel. Soon the Lopari and Chud natives living on the island heard about him, and he had much suffering to endure from them: they burned down his hut and what damage they were able to, and not only once did they beat him, they chased him from the island and pursued him so as to kill him. But God and the Queen of Heaven guarded Their saint. At the place of the burned hut there appeared to the Monk Lazar there again appeared the icon of the Uspenie (Dormition) of the MostHoly Mother of God, miraculously undamaged by the fire. It was this icon with which they had blessed him at the taking of monastic vows, and from it was heard a commanding Voice: "The faithless people shalt become faithful, and there wilt be one Church and one flock of Christ. Establish upon this place a church of the Dormition (Uspenie) of the MostHoly Mother of God". Another time the saint saw how this very place was blessed by "a Woman of majesty, radiant with golden hue, and resplendid men that did make reverence to Her". And soon there came to the monk the very eldest of the Lopari and besought him to heal a child born blind: "... then we shalt go from the island, as thy servants be commanded". The Monk Lazar perceived that this was an Heavenly Angel, and he raised up thanks unto the Lord. He healed the blind child, having read over it a prayer and sprinkling it with holy water. After this, the "bad people" quit the island, and the father of the healed child afterwards became a monk, and all his sons were baptised.
From that time there began to come to the monk many from faraway places – he baptised them, and vowed them into monasticism. There came to him even his fellow countrymen from Constantinople – the holy Monks Eleazar, Evmenii and Nazarii (Comm. 4 June) – future founders of the Forerunner monastery in the Olonetsk region.
Visiting at Novgorod, Saint Lazar received from Bishop Moisei (1352-1360) blessing for the construction of a monastery, together with an antimins (corporal) and priestly vessels. A church was built in honour of the Uspenie of the MostHoly Mother of God – the first in all the sea-coast region; also a church of the Resurrection of Lazarus, and even a wooden church of Saint John the Forerunner together with a refectory.
The Murmansk Uspenie monastery was built up and strengthened by its zealous head the Monk Lazar into the time of his old age.
The time of his end was revealed to him in a vision by his faithful protector – Saint Vasilii of Novgorod. Having chosen with the brethren a worthy successor to himself – the Athos elder Theodosii, and having communed the Holy Life-Creating Mysteries and blessed all, Saint Lazar expired to the Lord on 8 March 1391 at the age of 105 years. They buried him in a chapel alongside the church in honour of the Uspenie of the MostHoly Mother of God.
The Life of the Saint was written by the starets Theodosii from the words of the monk himself. 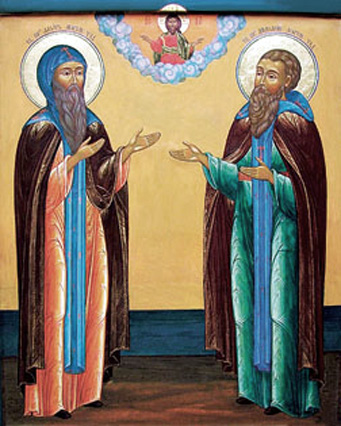