The Holy Martyrs Perpetua, Felicitas and Satyrus, and others with them 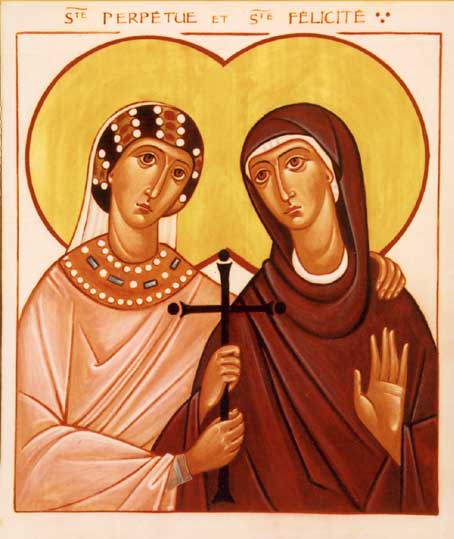 The Holy Martyrs Perpetua, Felicitas and those with them. Vibia Perpetua was from a patrician family, and lived in Carthage. She came to believe in Christ, and was baptized after her arrest as a Christian. A few days later, the twenty-two-year-old woman was taken to prison with her infant son. Arrested with her were her brother Saturus, the servants Felicitas, Revocatus, Saturninus and Secundulus, who were also catechumens.

Despite the exhortations of her father, who persistently appealed to her maternal feelings, the widowed St Perpetua refused to offer sacrifice to the pagan gods.

Before their execution, Sts Perpetua and Saturus had visions from God, which strengthened their souls. St Felicitas, who was eight months pregnant, gave birth to a baby girl while in prison. She rejoiced because now she would be permitted to die with her companions. There was a law forbidding the execution of pregnant women.

The martyrs were led from the prison into the amphitheatre. Saturninus and Revocatus had to face a leopard and a bear. Sts Perpetua and Felicitas were brought to the arena in nets, and they were pitted against a wild heifer. After being tossed to the ground by the heifer, the two women were led out of the arena. Saturus was bitten by a leopard, but did not die. The martyrs were then led to a certain spot to be killed by the sword. The young gladiator who was to execute St Perpetua was inexperienced and did not kill her with the first blow. She herself took his hand and guided it to her throat, and so she received the crown of martyrdom. This occurred in about the year 203.

The amphitheatre where these saints perished is located a few miles from the city of Tunis. In 1881, a room was discovered opposite the modern entrance into the arena. Some say this was a cell where the victims waited to be brought into the arena.

Your holy martyr Perpetua, O Lord,
Through her sufferings has received an incorruptible crown from You, our God.
For having Your strength, she laid low her adversaries,
And shattered the powerless boldness of demons.
Through her intercessions, save our souls!