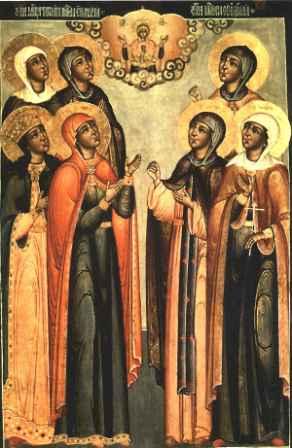 Saint Martha, mother of Saint Simeon of Wonderful Mountain (May 24), lived during the sixth century and was a native of Antioch. From her early years she yearned for monasticism, but her parents persuaded her to marry. Her husband, John, soon died, and righteous Martha with all her strength devoted herself to the raising of her son. She was an example of high Christian temperament for her son. She often visited the temple of God, she attended church services attentively and with piety, and frequently received the Holy Mysteries of Christ.

St Martha rose up to pray each night, and her prayers were offered with heartfelt warmth and tears. She particularly venerated St John the Forerunner, who was for her a protector, frequently appearing to her in visions. St Martha was charitable towards the poor, she fed and clothed them, she visited the convalescent and she attended to the sick, she buried the dead, and for those preparing to receive holy Baptism she made the baptismal garments with her own hands.

St Martha was reserved, and no one heard from her a frivolous, false or vain word, no one saw her angry, nor fighting with anyone nor bitter. She was a model of chaste and pious life and by her example she guided many on the pathway to salvation. When her son, St Simeon, had become a renowned ascetic, she urged him not to exalt himself for his own efforts, but to thank God for everything.

The time of her death was revealed to St Martha. She beheld angels with candles saying that they would come for her in another year's time. The saint was also granted visions of Paradise, and the All-Pure Virgin Herself showed to her the heavenly habitations prepared for the righteous.

St Martha's death was peaceful, and her body was buried on Wonderful Mountain, at the place of the ascetic deeds of her son, St Simeon the Stylite.

The image of God was truly preserved in you, O Mother,
for you took up the Cross and followed Christ.
By so doing, you taught us to disregard the flesh, for it passes away;
but to care instead for the soul, since it is immortal.
Therefore your spirit, O venerable Martha, rejoices with the angels.