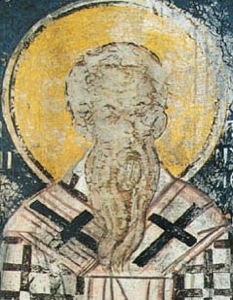 Saint Anatolius, Patriarch of Constantinople, was born at Alexandria in the second half of the fourth century, at a time when many representatives of illustrious Byzantine families ardently strove to serve the Church of Christ armed with Greek philosophic wisdom. Having studied philosophy, St Anatolius was ordained a deacon by St Cyril of Alexandria (January 18). Anatolius was present at the Third Ecumenical Council at Ephesus in the year 431 (September 9), at which the holy Fathers condemned the false teaching of Nestorius.

St Anatolius remained a deacon at Alexandria and after the death of St Cyril (+ 444), when the See of Constantinople was occupied by Dioscorus, a supporter of the heresy being spread by Eutyches, which said that the Divine nature in Christ had fully swallowed up and absorbed His human nature. This false teaching undermined the very basis of the Church's teaching about the salvation and redemption of humankind [trans. note: Since "what is not assumed is not saved", if Christ has only a Divine nature and not a human nature, then the salvation of humankind, and even the Incarnation of Christ would be rendered heretically docetic]. In the year 449 Dioscorus and his followers convened a heretical "Robber Council" at Ephesus, having received also the support of the emperor. The great advocate of Orthodoxy, St Flavian, the Patriarch of Constantinople, was deposed.

In the following year, 451, with the active participation of Patriarch Anatolius, the Fourth Ecumenical Council was convened at Chalcedon. The Fathers of the Chalcedon Council affirmed the dogma about the worship of the Lord Jesus Christ, "perfect in divinity and perfect in humanity, true God and true man, made known in two natures without mingling, without change, indivisibly, inseparably" (Greek: "asynkhutos, atreptos, adiairetos, akhoristos").

After a life of constant struggle against heresy and for truth, Patriarch Anatolius died in the year 458.

Among the canons enacted was the 28th Canon of the Fourth Ecumenical Council stating that the See of Constantinople is equal to the throne of Old Rome. The churches of Asia Minor, Greece and the Black Sea region, and all new churches that might arise in these regions were placed under the jurisdiction of the Patriarch of Constantinople, in accord with the 28th Canon.

St Anatolius also made a large contribution to the literary treasury of the Orthodox Church. He composed liturgical hymns for Sundays, for certain Feasts of the Lord (the Nativity and the Theophany of Christ), for the martyrs ( St Panteleimon the Healer, St George the Victory-Bearer, St Demetrius of Thessalonica). In the service books they are designated simply as "Anatolian" verses.