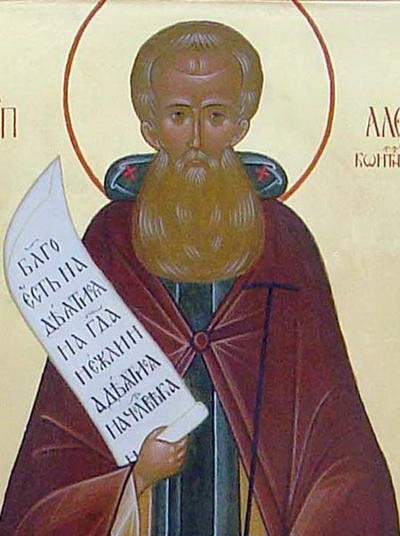 Saint Alexander, Founder of the Monastery of the "Unsleeping Ones," was born in Asia and received his education at Constantinople. He spent some time in military service but, sensing a call to other service, he left the world and accepted monastic tonsure in one of the Syrian wilderness monasteries near Antioch, under the guidance of igumen Elias. He spent four years in strict obedience and monastic effort, after which he received from the igumen blessing to dwell in the desert. Going into the wilderness, the monk took with him nothing from the monastery, except the Gospel. The monk then struggled in the desert for seven years. Afterwards, the Lord summoned him to preach to pagans.

The saint converted to Christ the local city ruler named Rabul, who afterwards was consecrated a bishop and for 30 years occupied the bishop's cathedra of the city of Edessa. Together with Rabul all the local inhabitants accepted Baptism, and before receiving the sacrament they burned their idols in the city square. Having confirmed the newly-converted in the Faith, St Alexander again went into the desert, where by chance he came upon a cave of robbers. Unafraid of the danger that threatened him, he preached the Gospel to them and urged them to repent. In fact, all the robbers did repent. They accepted holy Baptism, and they transformed their cave into a monastery, where they dwelt in prayer and penitence. St Alexander appointed an igumen for them, gave them a monastic rule, and he himself resettled still farther in the desert.

For several years he lived in complete solitude. But even there lovers of solitude began to flock to the monk. A monastery emerged, numbering 400 monks. Desiring at this monastery to establish uninterrupted praise to the Lord, the monk prayed for three years, that the Creator would reveal to him His will, and having then received the revelation, he initiated at the monastery the following order: all the monks were divided into 24 watches of prayer. Changing shifts each hour, day and night they sang in two choirs the Psalms of David, interrupting this only for the times of the divine services. The monastery received the name " the Unsleeping Ones," because the monks sang praise to God throughout the day and night.

St Alexander guided the monastery on the Euphrates for twelve years. Afterwards, leaving one of his disciples, the experienced Elder Trophimus as its igumen, he set out with some chosen brethren through the cities bordering on Persia, preaching the Gospel among the pagans. After this missionary journeying, St Alexander lived with his monks for a certain while at Antioch. There he built a church for the city-dwellers, and a home for the sick and homeless with the money that charitable Antiochians put at his disposal. However, through the intrigues of the jealous, St Alexander was compelled to move to Constantinople.

Here he founded a new monastery, in which he also initiated a monastic rule of "unceasing vigilance." St Alexander and his monks suffered at Constantinople under the Nestorian heretics, enduring beatings and imprisonment. After this, when the storm of unrest abated, St Alexander spent the last days of his life at the Constantinople monastery he founded. He died in extreme old age in about the year 430, after 50 years of incessant monastic effort. He is also commemorated on February 23.